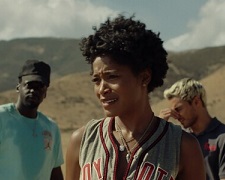 As a director, it’s nice when your first big movie is a massive hit.  On this same weekend 23 years ago, The Sixth Sense arrived in American cinemas and the line “I see dead people” became one of the most memorable in movie history.  It was the second highest grossing flick of 1999 (behind The Phantom Menace) and it made M. Night Shyamalan a household name… and a dual Oscar nominee for writing and directing.

The upside for Shyamalan is that it gave him more creativity freedom.  He could take chances on weird, not-so-audience friendly movies and still have the backing of big studio money with little interference.  The downside for Shyamalan is that with such early acclaim, it became harder to meet the public’s now higher expectations.  I’ve enjoyed some (emphasis on “some”) of his works but most would agree that nothing has matched what he achieved as a 28-year-old with The Sixth Sense.

Jordan Peele finds himself at a similar point in his career.  The comedian-turned-filmmaker won the Academy Award for best original screenplay in 2017 with his debut feature, Get Out, and he followed that up two years later with Us.  Nope marks his third outing and he’s sticking with what he’s become known for – a supernatural, horror-style flick where perplexed audiences are kept guessing throughout.

To the credit of the studio, and this is probably because of Peele’s strong influence, very few details are given away in the trailers and promotional material.  Stars Daniel Kaluuya (Judas and the Black Messiah) and Keke Palmer (Hustlers) play siblings responsible for a long-running horse wrangling business.  Their personalities are polar opposites and this makes for feisty, pull-no-punches banter between the pair – particularly since sales are slow.

What follows shouldn’t be spoiled but even if I tried, it’d be difficult to describe.  Some weird, unexplainable stuff goes on at the ranch and it brings together an eclectic group of characters to get to the bottom of it.  They are headlined by an inquisitive tech guru (Perea), a theme park operator with a curious past (Yeun), and a talented cinematographer on a constant search for the perfect shot (Wincott).

I’m split down the middle on this one.  It’s the kind of movie where you’re never bored but you’re also never fully buying into events as they unfold.  It’s a “round peg in a square hole” at times as Peele can’t quite get the storyline to marry up with the themes he’s selling.  The cinematographer is one character I’ll be forever scratching my head about.  Is it poor development… or am I simply a moron for not understanding him?

Maybe Nope will require multiple viewings to appreciate more deeply?  Maybe I’m just overthinking it?  It’ll get people talking but, at least for now, Get Out remains Peele’s high-water mark.