Review: Wish You Were Here 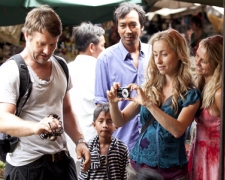 So many of us love to travel but how many of us fully weigh up all the risks before setting foot in another country?  I’m spending 4 days in North Korea in November and I confess that part of the attraction is that it will take me out of my comfort zone.  I’m not sure what to expect.

Wish You Were Here centres on four Australians who have gone on a week long holiday to a beachside resort in Cambodia.  Steph (Palmer) has booked the trip with her new boyfriend, Jeremy (Starr) and she has coerced her older sister, Alice (Price), and her husband, Dave (Edgerton), to join them.

What should have been a fun adventure has turned into a nightmare.  After a big night of partying and drinking, they wake up the following morning to learn that Jeremy is missing.  Days pass and panic starts to set in.  Did he meet with foul play?  Dave, Alice and Teresa alert the local authorities but no one seems to have any information of value which could lead to Jeremy’s whereabouts.

The crux of this film is set in Australia in the aftermath of the holiday.  In fact, when we first meet Dave and Alice, we see them arriving back home and trying to move on with their lives.  We only learn about their time in Cambodia through a series of flashbacks.

It’s clear from the opening scenes that Dave is withholding information.  He knows something about “that night” that he’s keeping from his wife and the authorities.  Writers Kieran Darcy-Smith and Felicity Price have therefore chosen to tell the story in a fragmented manner to create an element of intrigue.  If the story were told chronologically, we’d know everything from the outset and it would play out like a drama.  By keeping important details from the audience, it turns the film into a mystery.

The performances are solid and I enjoyed the interaction between Felicity Price and Joel Edgerton as they try to come to grips with the situation.  You can appreciate the difficult spot in which they’ve found themselves and understand the logic behind their actions.

That said, I wasn’t convinced by the way in which the story has been told.  Showing the events in such a disjointed order left me confused and I was often unsure whether we were watching scenes in Australia or Cambodia.  I’d also question why certain scenes (such as the one involving Joel Edgerton walking aimlessly at sunrise) are shown so early in the film.  They take the gloss off some of the twists that occur later in the film as you’ll know they’re coming.

While there’s just enough in the lead-up to hold your attention, the film suffers with a short, rushed finale.  It doesn’t offer enough in the way of closure and I wasn’t sure what to take away from it.  I can’t say too much but I’d warn audience members not to set their expectations too high.