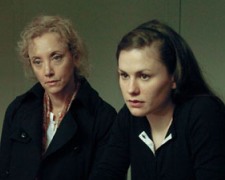 As a film director, the process of making a movie is seldom easy.  You have to convince a studio or investor to put in the money.  You have to enlist a crew who share in your creative vision.  You have to find a cast of great actors who are available when you need them.  You have to deliver your finished film on time and within budget.  It’s takes a lot of skill… but you also need a little luck.

Everything came together for director Kenneth Lonergan back in 2000.  His first feature film, You Can Count On Me, received much praise.  It made my top 10 list in 2001 and was a heartfelt story about the bond between a brother and sister.  It earned Laura Linney an Academy Award nomination for best actress with Lonergan picking up a nomination of his own for best original screenplay.  Not bad for your first movie!

In complete contrast, Lonergan’s follow up effort has been a debacle.  Margaret was shot in New York City back in 2005 and its troubles began in the editing room.  As per the conditions of his contract, Lonergan had full control over the film but with one key clause – it had to clock in at less than 150 minutes.  It was something he could not achieve and this led to disputes with the studio and the producer.

With his funding cut off, Lonergan borrowed money from friend Matthew Broderick (who appears in the film) to try to finish a 150 minute version that he approved of.  He wasn’t the only one trying to save the film though.  Unhappy with Lonergan, producer Gary Gilbert brought in his own editor (Dylan Tichenor from Brokeback Mountain) to craft a two-hour cut.  There was even a third version of the film being pulled together, free of charge, by the legendary Martin Scorsese (Hugo, The Departed).

After years of litigation, Lonergan’s 150 minute cut of the film was slipped into 14 cinemas across the United States in late September 2011.  It screened for 4 weeks, received next-to-no marketing and made a pitiful $43,000 at the box-office.  It was a sad end to a movie that had so much potential.

I’ll say this though – it’s fantastic to see Margaret getting a small release in Australian cinemas.  Yes, this is the “abbreviated” 150 minute version but it’s well and truly worth a look.  The story begins with 17-year-old Lisa (Paquin) roaming the streets of New York City and trying to buy a cowboy hat.  When she spots one being worn by a bus driver (Ruffalo), she tries to get his attention and ask where he purchased it.  Distracted, the driver runs a red light and kills a pedestrian.

Lisa initially lies to the investigating police officer and tells him that the light was green and this was just an unfortunately accident.  She feels compelled to protect herself and the bus driver.  Struggling to cope with the guilt, Lisa decides to fess up.  She naively believes the truth will set her free.  That is not the case.  The police have already closed their file and are reluctant to re-open the investigation based solely on the testimony of a witness who has changed her statement.  It marks the start of Lisa’s passionate crusade to clear her conscience, for better for worse, and see justice prevail.

The actors all look a little younger than we’re used to (given it was filmed 7 years ago) but Margaret is an absorbing character study headlined by a wonderful performance from Anna Paquin (The Piano).  We can see that Lisa is trying to do the right thing but she keeps making mistakes due to her immaturity and stubbornness.  Should we be sympathetic because of her age and the gravity of the situation?  It’s a question that I’m still grappling with.

Whilst it held my attention all the way through, I can see why Lonergan fought hard against his producer.  This two-and-a-half hour version feels fragmented.  You’ll be lured into a conversation only for the film to cut away abruptly and move to the next scene.  Things feel particularly rushed in the final third.

The DVD for the Margaret is being released in the United States this week and includes both this original cut and an “extended” cut that may help fill in some of the gaps.  You therefore have two options – check it out in cinemas or order it online.  Either way, I think you’ll be surprised about how good it is.