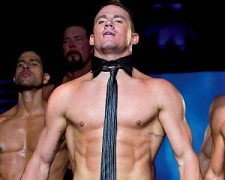 You only have to look at a movie poster for Magic Mike to see how this film will lure people into cinemas.  It features five good looking, half-naked men who are stripping on a stage and showing off their well-defined bodies.  One of those guys is Channing Tatum – a highly marketable commodity in Hollywood.  Women think he’s hot (physically).  Studio executives think he’s hot (metaphorically).

Tatum has already appeared in two movies in 2012 (21 Jump Street and The Vow) and both made more than $100m at the U.S. box-office.  Further, the release of the upcoming G.I. Joe: Retaliation has been pushed back by 9 months so that they can include more scenes with Tatum (who originally only had a small role).  It seems he can do no wrong!

Directed by the versatile Steven Soderbergh (Traffic, Ocean’s Eleven), Magic Mike is a tale of two halves.  The first hour feels like stripping, stripping and more stripping.  It takes place in a small club where ladies pay a cover charge and then throw more cash up on stage while they scream and salivate over the “entertainment”.

Dallas (McConaughey) runs the show and takes most of the profit but the star attraction is Magic Mike (Tatum).  He knows all the moves and women keep returning week after week to see him perform.  There are others in the troop but there’s not enough time to "flesh out" their characters in much detail.  This is a tale that revolves around Mike.

Well, that’s not entirely correct.  The story also spends time focusing a young guy named Adam (Pettyfer).  After bumping into Mike on the street, he his brought into the strip club and asked to help out with a few things backstage.  Suffice to say that it provides him with an eye-opening introduction to the world of a male stripper.

When a regular member of the company is unable to perform, Dallas gets desperate and decides to throw the reluctant Adam up on stage.  He puts on the worst display of stripping ever witnessed but the women love him anyway!  They scramble over each other in a mad dash to stuff $5 bills into his boxer shorts, clearly attracted by his shy personality and youthful good looks.  The kid is an instant hit.

The film enters a more serious, dramatic phase in the second hour.  Adam starts dabbling in drugs and it creates conflict between himself and Mike.  Not helping the situation is the fact that Mike has a “soft spot” for Adam’s sister, Brooke (Horn).

There’s also tension between Mike and Dallas.  Mike knows he’s in his thirties and that he can’t continue to be a stripper forever.  He’s looking to move into other entrepreneurial activities (such as his own home-made furniture business) but doesn’t have the financial capital to get started.  He’s after an equity share in the strip club – something that the self-driven Dallas is keen to avoid.

Magic Mike has received some extremely positive endorsements.  Through Twitter, acclaimed author Bret Easton Ellis called it the best U.S. film of the year.  I’m struggling to see where he’s coming from.

After its overly drawn out introduction (featuring far too much stripping), the movie rushes in its final stages.  Adam’s downfall isn’t covered in sufficient detail and nor are Mike’s plans for the future.  I also wasn’t convinced of the romance between Mike and Brooke.  They share a couple of nice scenes but I struggled to reconcile a few of their actions (without giving anything away).

Soderbergh has tried to bring an element of style to the film (evidenced by the final scene) but unfortunately, most of it feels cheesy and commercial.  The way in which Adam finds himself stripping on stage for the first time is a good example.  Given the subject matter, I couldn’t help but draw comparisons with Paul Thomas Anderson’s masterpiece Boogie Nights – a film that offered a better insight into its industry and had many more interesting characters.