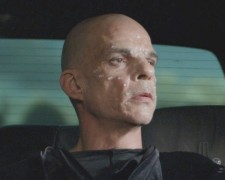 A “film” is defined on Wikipedia as a series of a still or moving images.  Holy Motors meets that basic definition.  I can’t argue with that.  However, there are many people who will have a more elaborate, a more precise definition.  They’re accustomed to a “film” containing a clear narrative, identifiable characters and a strong resolution.

If you have similar thoughts then you can forget about seeing Holy Motors.  I’m describing it more as an “experience” than a “film”.  Instead of sitting back, relaxing and enjoying my popcorn, I spent two hours trying to work out what the hell I was watching.  At the preview screening I attended, the stunned murmur from the audience as the closing credits started to roll said it all.

The whole movie takes place over a 24 hour period and follows a guy (Lavant) who is being driven around Paris in a limousine.  That’s my attempt at a simple, one-sentence definition.  From this point on, the more I reveal, the more confused you will become.

This guy has been given 9 jobs to complete.  The details are contained in separate paper files that are handed to him by his loyal driver (Scob) before reaching each destination.  Each job requires him to change his appearance and play a certain role.  The limousine is therefore armed with an array of costumes, wigs, masks and mirrors.

As an example, his first job sees him dress up as a crippled old lady who can barely walk.  Followed by two security guards in black suits, he sets himself up on a busy Parisian street and begs for money.  When he’s finished, he gets back into the limousine, changes his costume and sets off for the next assignment.

So why is he doing this?  What is he being paid?  Who else knows what’s going on?  Is this reality or fantasy?  If you’re expecting answers to these questions, think again.  It’s as if each “job” is stranger than the last.  The finale (which I won’t reveal) left me completely befuddled.  I’d recommend you don’t see this alone – for the sheer reason that you’ll need someone to talk it through with afterwards.

The film’s hypnotic tone and beautiful cinematography reminded me of Gaspar Noé’s Enter The Void (which premiered back in 2009).  You could also draw parallels with films such as Mulholland Drive and The Tree Of Life.  There’s no question that director Leos Carax wants to challenge the audience.  When asked about the public’s response at the Cannes Film Festival he said “I don't know who the public is, except a bunch of people who will soon be dead.”

Carax’s cryptic answers to press questions only add to the film’s mystery.  Instead of a director justifying his choices and explaining his rationale, Carax is giving nothing away.  I wouldn’t be getting my hopes up for any director’s commentary on the DVD!  It would appear that Carax wants audiences to formulate their own opinions, however varied they may be.

I’ve scoured the internet for a few interpretations and they make for good reading.  Perhaps there is a method in his madness.  Perhaps there is a “point” to this movie that I missed on a first viewing.  Does the last conversation in the film (as strange as it may seem) shed some light on what came before?  That’s up to you to decide.

Given that he takes on 11 different personalities, it came as no surprise to see audiences raving about the performance of Denis Lavant when it premiere at Cannes back in May 2012.  He’s terrific.  Those looking for more familiar names will spot cameos from Eva Mendes and Australian Kylie Minogue.  The bizarre nature of all the characters has stuck in my mind long after leaving the theatre.

Whilst I’m not completely sold on Holy Motors, I have to admire its audacity.  It's like a really difficult Sudoku puzzle - you'll love the challenge but will be irriated if you can't solve it.