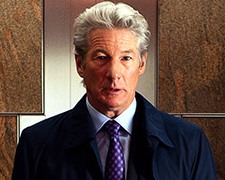 This is the most important week in the life of 60-year-old Robert Miller (Gere).  He’s on the verge of selling the investment management company that has made him a multi-millionaire.  Robert just needs to get clearance from the auditors and negotiate a final price with the buyer.  We’re talking about a figure that exceeds $500 million.  It should be more than enough for him to retire!

It’s not that simple though.  There’s a huge $400 million loss in one of his company’s hedge funds that Robert is trying to hide.  It was the result of a business deal that went horribly wrong.  Robert’s borrowed a simple $400 million from an extremely trustworthy friend and is using it to hide the loss from the auditors until the company is sold.  He can then repay the loan from the sale proceeds and no one will be the wiser.

Unfortunately for Robert, his daughter (Marling) uncovers his fraudulent activity.  She’s one of the chief investment officers at the company and the discovery has boxed her into a corner.  If she alerts the authorities, it will destroy her family’s fortune and her father will likely spend time in jail.  If she stays quiet, she’s now complicit in the fraud and risks her own reputation if discovered.

But wait.  There’s even more to this story.  Robert has been cheating on his wife (Sarandon) with a young art-dealer named Julie (Casta).  Julie is killed however in a late-night car accident where Robert was behind the wheel.  With just a small cut to his head, Robert makes a snap decision to flee the scene.

It’s not his car and there was no one in the area to witness the crash.  Perhaps he can get away with it?  If so, his wife will never learn of the affair and it won’t jeopardise the sale of the company.  He takes advantage of a nearby phone booth and gets an old friend (Parker) to pick him up and sneak him back home.

You should be getting a pretty clear picture that Robert isn’t a very nice guy.  Within the space of a few days, he’s committed both fraud and manslaughter.  It therefore makes Richard Gere (Pretty Woman, Primal Fear) a curious choice for the role.  He’s smooth, he’s charming and he wears a nice suit.  It’s as if writer-director Nicholas Jarecki is trying to lure us into liking him (and I say that as a positive).

The car crash marks the arrival of Michael Bryer (Roth), a police detective that has been assigned to investigate the accident.  He’s confident that Robert was driving the car but he just doesn’t have enough evidence.  He decides to target those close to Robert to see if one of them will slip up and reveal the truth.

As you can see, it all adds up to a film that has a bit of everything.  There are cover-ups, police investigations, family conflicts, cheating husbands, interfering lawyers and dodgy investments.  If it were to actually happen, I’m sure the folk at Today Tonight and A Current Affair would be scrambling to get their hands on the rights.

It’s a juicy narrative that will keep you interested but it does feel a little staged.  I struggled with the way in which Robert was so easily able to escape the car accident and come up with a clear, immediate plan to avoid detection.  It’s like watching an episode of NYPD Blue or Law & Order in the sense that it’s an entertaining story that you’ll go along with… but the pieces fit together too neatly in the end.