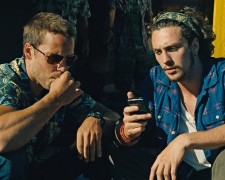 My thoughts on Savages can be summed up by splitting the film into three parts.  The opening half-hour is slow and frustrating.  It takes too long to introduce this story and its characters.  As the film’s narrator, Blake Lively keeps yammering on about these characters and her perspective on love and life.  It’s not required.  Her talent would be better put to use narrating a Terrence Malick film.

It’s largely centred on two guys, Ben (Taylor-Johnson) and Chon (Kitsch) who have established a successful marijuana growing operation in California.  They smuggled the seeds from Afghanistan and their strong customer base is a testament to their amazing product.  They’re the best the business with Ben providing the brains and Chon providing the brawn.

There’s a girl in the middle and she’s simply known as O (Lively).  In most films, you’d expect her character to cause a divide between the two guys.  That’s not the case here.  They’re happy to share and she’s the “girlfriend” to them both.  After smoking a particularly strong joint, there’s one moment where they all end up in the same bed together.

The film steps up when we’re introduced to a Mexican drug cartel that is looking for a piece of their enterprise.  It’s a “joint” venture, so to speak.  Ben and Chon would provide details on their products and their suppliers.  The cartel would then use this to satisfy their increasing market share both within the United States and back in Mexico.

Ben and Chon decide it’s not a deal worth pursuing.  They’d rather not get involved in a partnership with these untrustworthy Mexicans.  They’d prefer to sell the business as a whole, take the money and go on a lengthy sabbatical in Indonesia.

That won’t be possible though.  The leader of the cartel, Elena (Hayek), organises for O to be kidnapped by her right-hand man, Lado (del Toro).  She’s going to be kept locked up in a filthy cage for a year… and that’s only if the two guys agree to the partnership.  Boxed into a corner, it forces Ben and Chon to take action.  With the help of a corrupt Drug Enforcement Agency official named Dennis (Travolta), they try to find a way to rescue O and seek revenge against Elena.

It’s this second part of the film (which thankfully is the longest) that is its strong point.  Savages develops into a fun, entertaining “who’s in control” tale that’s easy to go along with.  We’re not just seeing the story from the perspective of Ben and Chon.  We follow Elena, we follow Lado and we follow Dennis.  They’re all after the same thing – money – but they’ve all got different plans.  They’re also not quite sure who to trust.

The film falters with a dumb ending.  I won’t elaborate here but once you’ve seen the film, you’ll know exactly what I’m talking about.  I haven’t read Don Winslow’s novel, on which the film is based, so perhaps that’s to blame.  It left the audience laughing at my preview screening and it wastes all the good work that went into the lead up.

Salma Hayek is the strongest member of the cast with her portrayal as the drug cartel’s leader.  She’s a vicious, calculating individual who knows how to manipulate.  Benecio del Toro and John Travolta are also good value.  I wasn’t as enthused about the three youngsters though – Taylor Kitsch, Aaron Taylor-Johnson and Blake Lively are boring by comparison.

With the premise stretched out over more than two hours, Savages reels you in but then doesn’t finish the job.

You can read my interview with Oliver Stone by clicking here.