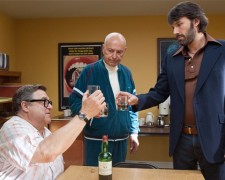 Director Ben Affleck isn’t afraid to point a few fingers during the opening of Argo.  He quickly covers the history of the United States’ involvement in Iran that began in the 1950s when the CIA helped overthrow the democratically elected Prime Minister.  The U.S. had acted due to the fact that Iran had nationalised their country’s vast oil reserves.

Over the next 25 years, the U.S. Government formed a close bond with Iran’s Shah to help increase their influence and to protect their commercial interests in the region.  Huge amounts of financial aid were provided to Iran and the U.S. meddled further with the introduction of Westernization policies.

The increasing anti-American movement within Iran reached a tipping point in 1979 and its people revolted.  The Shah was ousted from power and the Supreme Leader Ayatollah Khomeini took control.  It forced the Shah, who was suffering from cancer, to flee to the United States to avoid execution.

Following this brief history lesson, the film picks up the story on 4 November 1979.  A revolutionary group of Iranians stormed the U.S. embassy in Tehran and took more than 50 American diplomats hostage.  Six managed to escape however.  They snuck out through a back exit and took refuge in the home of the Canadian Ambassador.

With the stage set, Argo broadens its scope.  We cross to the United States and start following the mission to rescue these six Americans.  Top CIA agent Tony Mendez (Affleck) has a creative plan but it’s proving to be a “tough sell” to his superiors.

Mendez wants to fly into Tehran under the guise that he’s a Canadian film producer looking for a location for his new Arabian science-fiction movie.  He’ll then visit the Canadian Ambassador’s house, provide the trapped diplomats with fake passports and have them all fly out together as part of a film crew.

Realising it’s “the best bad idea” they have, the proposal gets the green light from the CIA.  Mendez knows that every detail has to be considered before setting foot in Iran.  He starts by flying off to Hollywood and working with a good friend (Goodman) to create the illusion that this fake movie is real.  You won’t believe the lengths they go to!

Argo is largely based on actual events.  The full story wasn’t made public until declassified by Bill Clinton back in 1997.  You can read all about it on the web but I’d suggest you squash your curiosity until you see the film.  It will make the tale far more intriguing and suspenseful.

Many have already made reference that 40-year-old Ben Affleck is following the footsteps of the late Sydney Pollack.  Affleck started life as an actor but he’s now spending more time in the director’s chair making quality, award-worthy dramas.  Argo marks his third directorial effort following Gone Baby Gone and The Town.

Affleck has made the film look as authentic as possible and the work of the costume designers and set decoration crew must be recognised.  You’ll also see from the footage in the closing credits that the actors look remarkably similar to the real-life people that were involved in mission.  Affleck could have added a Clooney, DiCaprio or Damon to enhance the movie’s marketability but it’s clear that he wasn’t after “big names”.  He wants the story to be the focus.

While I cannot find fault with the film’s strong visual presence, I do have concerns about the screenplay and in particular, the ending.  I was reminded of the clichéd scene in action-thrillers where a hero cuts the wire on a bomb with just one second left remaining on the timer.  There are too many such moments in Argo’s later stages.  I’m appreciative of the need to Hollywood-ise the story to build tension but Argo goes too far.  Those hungry for the truth will be able to find more through a simple internet search.

The performances are superb with the two standouts being Bryan Cranston (Breaking Bad) as a supervisor within the CIA and Alan Arkin (Little Miss Sunshine) as the film’s fictitious producer.  One of the film’s best scenes features Cranston going on a passionate crusade to secure plane tickets for the mission.  Arkin, with the help of John Goodman, adds a useful dose of comedy.  There’s one line in particular (a reference to his fake movie’s title) that will be remembered for many years to come.

The use of dramatic licence in the finale is too obvious but aside, Argo is a solid dramatic thriller that is informative, entertaining and gripping.