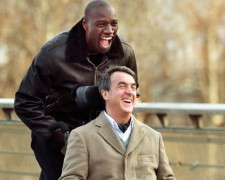 It’s satisfying to see a locally made film thrive at the box-office.  Last year in Australia, we saw Red Dog warm its way into the hearts of audiences.  It spent an amazing 11 weeks inside the top 10 and grossed more than $20m here in Australia.  This year’s success story has been The Sapphires.  It’s pulled in just over $14m to date and was picked up by Hollywood heavyweight Harvey Weinstein for a release in the United States.

They’re impressive statistics… but they cannot compete with The Intouchables.  This is a film that spent ten consecutive weeks in the number one position at the French box-office following its release in November 2011.  Wow.  Just wow.  The film has been extremely popular with international audiences and has now made more money than any other non-English language film, with the except of The Passion Of The Christ.

It’s taken almost a year but finally, The Intouchables has found its way into Australian cinemas.  It’s getting a bigger release than you might expect.  Most of the major cinema chains normally wouldn’t go near a foreign language film with a bargepole.  That’s not case this time around.  They’re trying to cash in on the film’s wide appeal and believe that many Australians are going to want to see it, particularly once the word-of-mouth starts to spread.

Based on actual events, The Intouchables is the simple tale about a friendship that forms between two very different men.  Philippe (Cluzet) lives in a beautiful Parisian mansion.  He’s extremely wealthy and has a small group of loyal servants at his disposal.  Tragically, Philippe is paralysed from the neck down – the result of a paragliding accident many years ago.

Driss (Sy) is the complete opposite.  He’s just been released from a 6-month stint in jail, lives in an extremely poor neighbour and has a rocky relationship with his extended family.  A few of the film’s early scenes are overdramatised but they make the clear point that Driss is a self-centred guy who takes no responsibility for his actions.

Ironically, it’s Driss’s egotistical behaviour that leads him to Philippe in the first place.  Philippe has advertised for a live-in carer – someone who he will employ to help care for him on a day-to-day basis.  Driss turns up at the interviews but it’s not because he wants the job.  He just wants to get his form stamped so that he can show the welfare office and continue receiving his unemployment benefits.

The movie then chronicles their up-and-down adventures and a “closeness” that slowly develops.  We’ve seen this kind of movie before – two unlikely people meet and then forge a valuable friendship that will change their lives forever.  They each need the other… but for different reasons.

The two heartfelt central performances from François Cluzet and Omar Sy will inject you with happiness.  They make a wonderful team and the scenes they share, particularly in the movie’s later stages, will leave you feeling great about life.  You’d be hard pressed to find a better crowd-pleaser this year.

Don’t take my word for it though.  Just ask anyone who has already seen it.