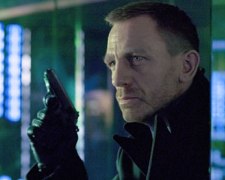 A key aspect of any movie is how quickly it can reel you in.  In the case of Skyfall, this box is ticked in the opening few minutes.  The film begins with an elaborate action piece that is both exhilarating and suspenseful.  It surpasses the foot chase sequence (complete with the use of cranes) that I remember so vividly from 2006’s Casino Royale.  Coupled with the traditional opening credits, to the backdrop of a new song from Adele, you’ll realise early on that this is a very good Bond movie.

The premise is somewhat darker than we might expect.  A hard drive that contains the identity of every undercover operative within MI6 has been stolen by an unknown adversary.  M (Dench) isn’t sure who is responsible and what they plan to do with this incredibly valuable information.  Things get even worse when a bomb is detonated within MI6 that kills 6 civilians.

These incidents have left the British Government questioning the security within MI6 and whether the aging M is still the right person to sit at the top.  Is it time to bring in some fresh blood with some fresh ideas?  That seems to be the opinion of the Chairman of the Intelligence and Security Committee (Fiennes) who has told M that it’s time to retire.

I’m sure she’d pick up a nice redundancy package but M has no plans of giving up her title just yet.  She’s called upon her most loyal agent, James Bond (Craig), to discover who is behind the attacks on MI6 so that she can restore the public’s credibility in the organisation she has long helmed.

Sam Mendes is a gifted filmmaker but he was a curious choice to director Skyfall given his background has been in critically acclaimed dramas such as Road To Perdition, Revolutionary Road and American Beauty (which won him an Oscar in 2000).  Burned with the weight of public expectation and the pressure of $150m budget, Mendes has delivered!  There’s a “style” about this film that elevates it above a traditional Bond flick.

It feels odd saying this about a James Bond movie but what impressed me most was the cinematography from 9-time Academy Award nominee Roger Deakins (The Shawshank Redemption, No Country For Old Men).  His work is highlighted by a beautifully shot action scene atop a Shanghai office building that uses reflected light to great effect.  Can someone please give this guy an Oscar before it’s too late?

Daniel Craig is again superb with his portrayal of Bond as a man who looks cool, calm and collected on outside but does have a few insecurities on the inside.  Judi Dench gets a lot more screen time than you might expect and is also terrific.  The playful banter between Dench and Craig is great and credit belongs with the screenwriting team.

Ben Wishaw (Bright Star) deserves a mention as stylishly dressed Q, the man within MI6 who provides Bond with his firepower and necessary gadgets.  The moment where he meets Bond for the first time will leave you smiling.  The character you’re most likely to remember though is the villain.  We don’t meet him until about half-way through the film but Javier Bardem (No Country For The Old Men) brings a camp-ness to the role that will surprise.

There’s a running theme throughout Skyfall about old versus new.  This is the longest running movie franchise in history (with 23 films over 50 years) and it’s a nice touch to see this added to the screenplay.  I don’t want to spoil too much but you’ll get the picture once you see the weaponry and cars that are used.  The plot involving M being replaced and Bond being past his prime also fits suitably within this message.

My excitement and enthusiasm started to wear off a little in the film’s second half and more could have been made of the finale but this is still one of the best Bond films ever made.  I can’t wait to see what they come up with next!