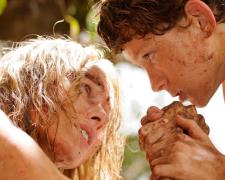 It was only a matter of time until we saw a major movie focus its attention on the horrifying tsunami that stuck on Boxing Day in 2004.  Over 230,000 people were killed in countries including Indonesia, Sri Lanka, India and Thailand.

The Impossible follows one family’s ordeal and is based on a true story.  The film opens with Maria (Watts) and Henry (McGregor) arriving at a beachside holiday resort in Thailand with their three sons.  Thankfully, the film doesn’t get bogged down in a long-winded “let’s get to know the characters” type introduction.  The tsunami strikes roughly 15 minutes into the movie.

As has been well documented, there was no warning.  These five characters were simply enjoying themselves in the resort’s idyllic swimming pool.  A faint rumble could be heard in the distance and then seconds later, a massive wall of water enveloped them.  It’s a sequence that has been well choreographed by Spanish director Juan Antonio Bayona (The Orphanage).  The horror of what you’ll see on screen will feel very real.

What follows is the crux of the film – a battle for survival.  The wave swept Maria several kilometres inland.  She was pushed underwater for lengthy periods of time.  Her body was torn and battered against fallen trees and other debris.  When she finally comes to rest, her body is covered in mud and she’s bleeding from several open wounds.  She located her eldest son, Lucas (Holland), but her husband and other two kids are nowhere to be seen.

It’s at this point where the emotional impact of the film starts to kick in.  Maria and Lucas look around to find nothing but destruction.  There are no mobile phones to be able to call for help.  There’s no hi-tech hospital waiting around the corner to treat their injuries.  In fact, they don’t even know where they are.  What are they going to do?  Should they look for the rest of their family or should they go in search of medical attention?  What would you do if faced with such a situation?

There’s some cringe-worthy stuff in this… and I say that to the film’s credit.  It’s tough to watch at times.  Thanks to the emotive performance of Australian Naomi Watts, you’ll feel the pain and suffering of her character as she drags her bleeding body towards safety.  She’s acting like a mother too – putting the wellbeing of her own son, who just has a few scratches, ahead of herself.  It’s not hard to see why she earned her second Academy Award nomination (following 21 Grams in 2003).

It’s a shame that some the dialogue feels so cheesy.  There’s a scene where Lucas lets out his frustrations on his mother and it feels scripted, unnatural.  While I can’t say too much, there are a few too many coincidences in the finale (oh, and an odd dream-like sequence) that ruins much of the drama that has been created in the lead up.  I’m also not sure about the score from composer Fernando Velazquez.  It’s overdramatic at times.

The film hasn’t escaped its share of controversy with some labelling it as “racist”.  They’re not happy that it focuses largely on a rich white British family and seems to ignore the plight of the many locals who lost their lives.  There’s also the fact that the real family, on which this story was based, was Spanish.  To each their own… but I don’t have a big problem with this.  The heart of the story is still there and I can understand the need to cast Hollywood stars to help sell tickets and recover the $45m budget.

The Impossible has been lost a little amongst the hype of this year’s big award season contenders (many which are about to be released in Australia) but it’s still worth a look if you can find the time.