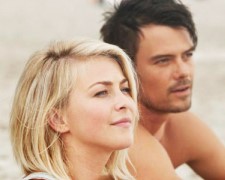 Nicholas Sparks has written 17 books of which 8 have now been adapted into a feature film. That’s not a bad strike rate. It pushes him past JK Rowling (with her 7 Harry Potter novels) with the added advantage that all of his stories are original and not part of a long running series.

I use the term “original” rather loosely. One could argue that many of Sparks’ cinematic adaptations cover familiar territory. In The Lucky One, released in April last year and starring Zac Efron and Taylor Schilling, we followed a troubled young man who fell in love with a woman taunted an obsessive ex-husband.

In Safe Haven, we’re following a grieving young man who has fallen in love with a woman who has fled from her abusive husband. The guy’s name is Alex (Duhamel) and he’s struggling to raise two kids after his wife passed away due to cancer. The girl’s name is Katie (Hough) and she’s on the run from the authorities after stabbing her husband with a knife.

A connection between the two leading characters is essential in any romantic drama and I like the pairing of Julianne Hough (Rock Of Ages) and Josh Duhamel (Transformers). The dialogue they share is a little clunky but it’s hard not to feel sympathy for both characters given their recent run of bad fortune.

Unfortunately, the film suffers with a distracting, not-so-believable subplot involving a cyborg-like police detective (Lyons) who is trying to locate Katie following her husband’s stabbing. We cross back to this side story every few minutes in an obvious attempt to add a little intrigue to the main show.

The real problem though… is the ending. The laughs during the preview screening and the post-film discussions with friends in foyer confirmed I was not alone with my thinking. I’d love to explain my thoughts in this review but I’m burdened with the mantra that I like to keep things “spoiler free”. If you do see the movie though, you’ll know exactly what plot development I’m referring to.

The Valentine’s Day release date is no coincidence and I’m sure the Nicholas Sparks fan base will propel the film to a healthy box-office take. The success of his earlier adaptations has proven there’s an audience for these formulaic romantic genres. I just wish they were more adventurous.