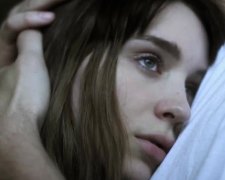 We’ve been waiting over a year and Side Effects marks the first on-screen appearance of Rooney Mara since her Oscar nominated performance in The Girl With The Dragon Tattoo.  Her character is Emily Taylor – a young woman who has been battling depression for some time.  The fact that her husband (Tatum) just completed a 4-year prison term for insider trading hasn’t made her life any easier.

After an attempted suicide attempt where she drove her car into a wall at high speed, Emily has been placed in the care of a local psychiatrist named Jonathan Banks (Law).  There are no easy answers when it comes to depression with Emily’s guarded disposition doing little help the situation.  Jonathan’s response is to keep doing things “by the book” – prescribing a few different kinds of medication and hoping they will make a significant difference.

The film’s heartbeat kicks up a few notches as a result of an “incident”.  This particular event isn’t shown during the trailer (a refreshing surprise) and it wouldn’t be right to reveal specifics in this review.  I’ll only go as far as referring to the film’s title.  One of the drugs prescribed by Jonathan comes with some unanticipated side effects.

Director Steven Soderbergh (Traffic, Ocean’s Eleven) is a creative, versatile filmmaker and I enjoyed the way he slips a few red herrings into this story.  Just when you think you know where it’s heading… it subtly changes direction.  Unfortunately, what starts out as an intriguing drama degenerates into a silly thriller during its later stages.  The rules of logic don’t seem to apply.  It left me with a puzzled look as I reflected back on the way the “incident” itself had been shown.

It’s a shame things falls away because writer Scott Z. Burns (The Bourne Ultimatum, Contagion) has crafted some good conversational pieces during the first two-thirds.  These are intelligent characters and the dialogue reflects that.  Jude Law is particularly good as a psychiatrist trying to rationalise the situation and gather support from others.

50-year-old Steven Soderbergh has recently hinted that he’s ready to pack up his director’s chair and retire.  Despite my lukewarm feelings about Side Effects, I hope that’s not the case.