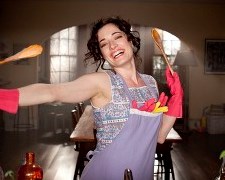 Elspeth Dickens (Kelly) is happy. Her husband, James (Keating), works for a Greenpeace-type organisation and has just returned home after a lengthy stint aboard an anti-whaling vessel. It’s great news for their twin boys, who get to spend some quality time with their father, and it’s great news for Elspeth, who is looking for some “romantic” time in the bedroom.

The next morning, we realise that Elspeth is not quite so happy. There’s tension in this household, apparently. She’s tired of the fact that her husband is constantly travelling and that she must battle her two troublesome children unaided. Elspeth is also lonely. This is because (1) she lives in a remote Tasmanian farmhouse, (2) she doesn’t have any friends, and (3) other mothers in this small town are pretentious bitches.

When her husband is forced onto the open seas yet again, Elspeth turns to the internet for companionship. Don’t worry. I’m not talking about an online dating site. Through the help of a nerdy, pimple-faced teenager who runs his own IT business, Elspeth sets up a 24-hour webcam in her kitchen. She wants to broadcast her life to the world and hope that people will find her interesting. Everybody wants to be famous, right?

Within a matter of days, Elspeth becomes an internet sensation. We are shown footage of women all over the world, from an absurd variety of backgrounds, who are glued to their computer screens around the clock. They tune in, conveniently at the same time Elspeth is in the kitchen, to see her dress up and sign songs while cleaning dishes in her kitchen sink.

Her online activity has attracted the attention of a Sydney-based marketing company run by the autocratic Cassandra Wolfe (Szubanski), a character reminiscent of Miranda Priestly (aka Meryl Streep) in The Devil Wears Prada. Cassandra’s company has been tasked with finding a spokesperson for a new type of computer and acting on the advice of her loyal assistant (Johnstone-Burt), she believes Elspeth will be the perfect fit.

After organising a last-minute babysitter, Elspeth suddenly finds herself whisked off to Sydney and immersed in a world of advertisements, photo shoots and 5-star hotel rooms. Is this what she wants though? It comes back to a familiar question – does career come before family?

>Goddess is a light, well-intentioned effort that blends the comedy and musical genres. Star Laura Michelle Kelly has been performing on London’s West End for more than a decade but this marks her first leading role in a feature film. Kelly’s beautiful voice and happy-go-lucky nature will charm many (even if it is ridiculously obvious that the singing was recorded in a studio). It’s Magda Szubanski who provides the film’s major highlight though – a humorous musical number that begins in a boardroom.

While there’s fun to be had, it’s a shame the screenplay implies a low level of intelligence on the part of the audience. So much of the story rings false. Would Elspeth really have a webcam that takes off so quickly? Would she really have no friends to confide in?

The scenes involving conflict also feel artificial. Why did she react so negatively to a tasteful nude photo shoot that could launch her career? Why didn’t she try to come to a compromise with her husband when her work and family life started to clash? Here’s a newsflash – it is possible to be a mother and earn a living at the same time.

The end result is a movie where we never get to know our leading lady. Who is Elspeth Dickens? She can sing and dance but what does she want out of life? Is she really happy? I’ve asked a lot of questions in this review. I only wish the filmmakers had done the same of these characters.