Review: Sleepwalk With Me 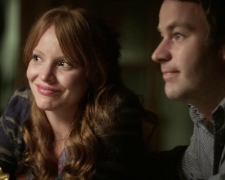 I’ve stood on a stage in front of a thousand people and delivered a speech. No problems. I do live radio every week on Brisbane’s highest rated breakfast program. No problems. Could I stand on a stage in front of 50 people and try to be a stand-up comedian? Hell no! I can’t think of many things more terrifying. Even if you fed me the jokes, I’d struggle to deliver them. Humour is not my strong suit.

Sleepwalk With Me is a very personal film for Mike Birbiglia. That’s not just because he’s the director, writer and lead actor. It’s also because the story is semi-autobiographical. He first told it as part of an off-Broadway play in New York City in 2008 and now, it has been brought to the big screen with the help of Ira Glass, the host and producer of the popular radio program This American Life.

When we first meet his character in the film, known as Matt instead of Mike, my first reaction was to cringe. It’s like he’s borrowed from the works of Woody Allen and created a neurotic, irritating fool who narrates and over-analyses every part of his life. Perhaps that’s what the real Mike is like. He’s been with his girlfriend, Abby (Ambrose), for more than 8 years and he’s tired of fielding questions about when they’re going to get married.

So why hasn’t he popped the question? Well, Matt is waiting until he gets his life in order first. He’s sick of working late nights behind a bar for a minimum wage. He’d much prefer regular, high-paying gigs where he can showcase his stand-up comedy routine. Perhaps he could even be fortune to get his own television sitcom in the same vein as Jerry Seinfeld.

Once you see Matt’s attempts at comedy, you’ll realise such goals are not dreams… but delusions. He’s utterly hopeless. A small piece of advice will steer him in the right direction though. After talking to a fellow comedian about his up-and-down relationship and a recurring sleepwalking problem he has at home, Matt incorporates this material into his act. Suddenly, he’s getting laughs. Suddenly, he’s getting paid.

It takes a while to find its feet but Sleepwalk With Me develops into an interesting film about an interesting person. You’ll be curious to know how Matt deals with his new comedic success and what effect it has on his relationship with his long-time girlfriend and his close family. It also offers a nice insight into the world of a struggling stand-up comedian. For every Robin Williams, Chris Rock or Louis C.K., there are a thousand others driving 50 miles for a gig that will barely cover the cost of their petrol.

Shot on a small budget, the film premiered at the 2012 Sundance Film Festival and has been popping up, to generally good reviews, at other film festivals across the United States. Mike Birbiglia has been in Australia for the Sydney and Melbourne Comedy Festivals (proof that his story does have a happy ending) and it’s allowed his film to get a small release in this country. If you’re interested in the subject matter, you’ll have to make sure you find time to see it.