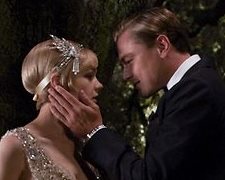 He owns a lavish mansion on Long Island that is impeccably maintained by a small army of servants. He drives around in his state-of-the-art motor vehicle while wearing his beautifully tailored suits. He throws extravagant parties filled with fireworks, music and a never-ending stream of alcohol. You don’t even need an invitation to attend!

But who is Jay Gatsby (DiCaprio)? How can he afford all of this? Why is he so generous? Why does he hide alone in the upper floors of his mansion while everyone is partying below? The man who knows the answers is the man telling the story – Nick Carraway (Maguire). Several years have passed since that exciting summer of 1922 and Carraway, now being treated for alcoholism in a sanatorium, is recounting the story to his doctor.

Author F. Scott Fitzgerald could have never imagined that his novel would one day become a blockbuster movie playing to packed audiences across the globe. At the time of his death in 1940, only 25,000 copies of his novel had been acquired. It wasn’t until World War II that it started to become a “must have” addition to any bookshelf.

As of today, an estimated 25 million copies have been sold. One of those found their way into the hands of Australian director Baz Lurhmann. Having already proven that he can adapt a classic piece of literature (Romeo & Juliet in 1996) and bring colour to a long-forgotten era (Moulin Rouge in 2001), Lurhmann decided to the raise the bar even higher. He wanted to take F. Scott Fitzgerald’s much-loved masterpiece (as it is now known) and transform it into something equally memorable on the big screen.

Has he succeeded? The answer to that question is “no” but it comes with an asterisk. Luhrmann picks up plenty of marks for way in which he has brought this world to life. It’s the first time he’s taken advantage of 3D technology and when you throw in the extravagant sets, costumes and visual effects, it's as if you’re watching a moving painting. New York in the 1920s could not look any more beautiful.

There are numerous themes within The Great Gatsby but central to it all is Gatsby’s quest to win the heart of Daisy Buchanan (Mulligan), a young lady who has been his obsession for many years. If he can convince Daisy to leave her athletic, well-to-do husband (Edgerton), Gatsby believes they will spend the rest of their lives in utopia.

This is where the film underachieves. It is missing the most important ingredient – emotion. With both Romeo & Juliet and Moulin Rouge, I can remember being reduced to tears (well, moist eyes at the very least) by their tragic tales of star-crossed lovers.

This too is a tragic tale but, put simply, I did not care about the characters. Nick Carraway is full of profound thoughts but he’s too much of a goofy bystander. Daisy Buchanan has the looks but it’s hard to see the attraction given her bland personality. As for Jay Gatsby, there’s nothing subtle about his deeply insecure demeanour and the way he says “old sport” one too many times.

It’s interesting that despite the lukewarm reception from critics in the United States, The Great Gatsby is thriving at the international box-office. Perhaps audiences are tiring of animated features and superhero movies. They’re looking for films with real people and real storylines. I’m thrilled that Baz has produced another crowd-pleaser. I only wish I was part of that crowd.