Review: In The House 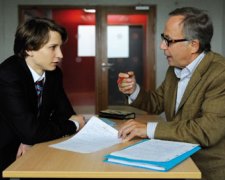 Germain (Luchini) is at home marking the assignments of his high school literature class. The students had a simple task – write about what happened to them over the weekend. Unfortunately, their submissions are terrible. He reads a sample of them to his wife, Jeanne (Scott Thomas), and it’s clear that these students simply do not care about the subject.

There’s an exception though. A 16-year-old named Claude (Umhauer) submitted a lengthy hand-written piece. He reveals that he is infatuated with the home from a fellow student, Rapha (Ughetto). He’ll often sit on a bench in the adjoining park and fantasise about what goes on inside. It’s rather creepy.

Over the weekend, Claude took his obsession one step further. He befriended Rapha and offered to help with his maths homework. It may seem a kind, gracious act but Claude isn’t after a new friend. He just wants to be invited inside the house so he can snoop around and get a sense of what their life is like. While Rapha is completing a maths problem in his bedroom, he can peak into cupboards and eavesdrop on conversations shared between Rapha’s mother (Seigner) and father (Menochet).

Claude’s story ends with the words “to be continued” and it leaves Germain somewhat shocked. Claude deserves a good mark as it’s an open, well-written piece that comes with a splash of mystery and intrigue. It will grab the attention of any reader. However, it also reveals that Claude a cunning, sinister individual.

Germain considers alerting the school’s headmaster but in the end, he decides to encourage Claude to keep writing. Is this because he thinks Claude is a gifted student who could one day be a great author? Or is it because he’s now drawn into the story and wants to know more about the secret lives of Rapha and his family?

There are a few moments within In The House that push the boundaries of believability but this is still an interesting, creative, puzzling film that is best described as a black comedy. It’s a dark subject matter but writer-director François Ozon (Swimming Pool, 8 Women) adds a few light touches to keep the audience on edge. These characters are messed up and yet there I was, sitting in the back row of the cinema, with a smile on my face.

Many elements of this tale will keep you thinking and guessing. How much of Claude’s story is real? How much has been embellished so as to make it more appealing? Also, what’s the deal with Germain? Should he spending so much time helping Claude outside of regular school hours? Who really has the upper hand in their student-teacher relationship?

In The House took out the FIPRESCI Prize at the 2012 Toronto Film Festival and picked up 6 César Award nominations including best picture (losing to Amour). I’m not alone with my admiration for the film and as one of the year’s best foreign language releases, you should be checking it out.