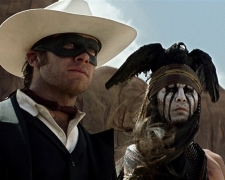 The Lone Ranger story began as a radio serial in 1933 and then took off as a television show in 1949. I don’t think I’ve ever seen an episode (it was a few decades before I was born) but I am very familiar with The Lone Ranger’s famous catchcry – he’d jump on his white horse and shout “Hi yo, Silver! Away!”

We do get to hear that line in director Gore Verbinski’s $250m blockbuster but it’s not until the very end (and it’s done so in a humorous fashion). The reason is that this is an origin story, in a similar vein to last week’s Man Of Steel. It shows us how the Lone Ranger came into existence, why he wears a mask and how he became friends with Tonto.

The central character is a man named John Reid (Hammer). Now a fully qualified lawyer, he has returned to his small home town to ensure that justice is upheld at all times. He does not want the Texas Rangers, led by his older brother Dan (Badge Dale), dishing out their own violent brand of “justice”. Rather, he wants to see all those arrested tried in a formal court with appropriate representation.

John’s lofty ideals come into question when his brother his brutally murdered by the notorious Butch Cavendish (Fichtner) and his thieving gang. I need to emphasise the term “brutally”. It’s one thing to be shot several times. It’s another to have a knife shoved into your chest and to have your heart ripped out.

There’s now only one thing that matters in the life of John Reid – locating Cavendish and making sure he pays for his crime. He’s not alone though. A Native American named Tonto (Depp) also seeks revenge against Cavendish for slaughtering his family many years ago. They’re as different as chalk and cheese but John and Tonto form an uneasy partnership and go in search of the man they hate.

The Lone Ranger is a film that doesn’t know what it wants to be. There are elements that make you think it’s a light, fun comedy. This is evidenced by some of the childish banter between John and Tonto. Armie Hammer plays it straight and Johnny Depp does what he usually does – providing quick one-liners and sarcastic facial expressions (just as he does in any Tim Burton film). There are a few genuine but you can’t help but think that there needed to be more.

On the flip side, there are parts of this film that make you think it’s a violent, blood-thirsty drama. I’ve already touched on Dan’s death but there’s another sequence late in the film where the body count is extremely high. I’m not saying that the film should be all sweet and rosy. My problem is that the horror of this scene is “glossed over” as if it’s just a run-of-the-mill event.

As for the broader plot... it lacks coherence. This is most evident through the bizarre 1933 San Francisco storyline where an older Tonto retells the tale to a small boy. Considering the film is two and a half hours long, was it needed? What was it supposed to add? Characters such as Dan’s widow (Wilson), a feisty brothel manager (Bonham Carter) and a ruthless railroad tycoon (Wilkinson) also needed more relevance and more screen time.

I’m usually blasé when it comes to big action sequences but I did enjoy the film’s finale. It’s so farcical, so ridiculously over-the-top… that I had fun with it. A shame this tone was pursued in the two hours that preceded it.

You can read my interview with star Armie Hammer by clicking here.