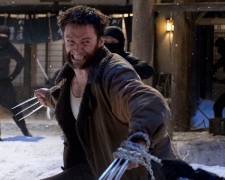 How do you kill someone who cannot be killed? I don’t know the answer. Neither did the villains in this film. It didn’t stop them trying for two hours though. They showered the Wolverine with sharp arrows… nope, didn’t work. They pumped him full of bullets… nah, no luck. They pushed a samurai sword through his heart… pfffff, no chance.

Don’t get me wrong – I didn’t think the bad guys would walk off into the sunset with the Wolverine’s dead body draped over their shoulders. The problem I’m alluding to is that this film doesn’t offer much in the way of excitement or suspense. Aside from a slightly unexpected plot development in the final minutes, it does things by the book.

It opens with our leading man, known as Logan (Jackman), keeping a very low profile in a small American town. He’s hiding from the world and still coming to grips with the death of his former flame, Jean (Janssen) – you’ll need to watch 2006’s X-Men: The Last Stand to help bring you up to speed on that subplot.

Logan is a tired, forlorn figure but he will be thrust back into combat when he pays a quick visit to a dying friend in Japan. Yashida owns one of the world’s wealthiest companies and, knowing that his days are numbered, he has agreed to give full control to his granddaughter, Mariko (Okamota).

Not everyone is happy with this decision. The Japanese Yakuza try to kidnap Mariko but thankfully, Logan is able to use his sharp claws and his regeneration powers to save the day. Oh, and in true Hollywood style, they fall in love.

There are plenty of expendable henchmen to do the dirty work but the head villain providing them direction is a scientist known as the Viper (Khodchenkova). I’m not exactly sure what her plans are going forward but in the short term, she’s determined to capture the Wolverine and harness his powers.

The Wolverine was given a spin-off back in 2009 (X-Men Origins: Wolverine) and I don’t know why 20th Century Fox decided to give him another. The X-Men series works best when it brings together all of the mutants, both good and bad, and pits them against each other in a series of physical and moral confrontations. As you’ll see from a quick clip during the closing credits, that looks like it’ll be offered in next year’s X-Men: Days Of Future Past.

This film tries to go down a darker route with an inference that Logan is contemplating suicide so that he can be reunited with Jean. It’s a subplot with potential but it’s not fleshed out in enough detail. The strange dream sequences, which are designed to show his fragile mental state, are best described as “head-scratching”.

I’m sure many will see The Wolverine for the sole reason that it stars the increasingly popular Hugh Jackman (Les Miserables). He’s a solid actor but it’s a role that doesn’t require much. It’s as if director James Mangold (Walk The Line) told him to turn up with chiselled abs and be prepared to drop the occasional swear word for comedic effect.

After months of comic book / superhero movies, they’re all starting to feel the same. I’m getting tired.