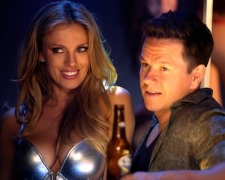 Daniel Lugo (Wahlberg) works as a “senior fitness coordinator” at a successful gymnasium in Miami. He has a great body, he can bench press a gazillion kilos, and he is well liked by his customers. Daniel dreams of bigger things though. At a cheesy self-help seminar, he is singled out in the audience and told that he should become a “do-er” as opposed to a “don’t-er”.

Daniel’s problem is that, to quote directly from the film, he is a “dumb stupid f***”. Instead of starting his own business or looking for better job opportunities, Daniel’s idea of becoming successful is to steal from others. He befriends a multi-millionaire (Shalhoub) at the gymnasium and comes up with an idiotic plan to kidnap the guy and then steal his car, his house and his cash.

It’s not something he can pull off alone so he’s brought in two friends to assist. Paul Doyle (Johnson) is a devout Catholic who was recently released from prison and is battling a cocaine addiction. Adrian Doorbal (Mackie) is a gym-junkie who has become addicted to steroids and now can’t function in the bedroom.

Based on actual events (although rather loosely from what I’ve read), Pain & Gain had the potential to be a great “truth is stranger than fiction” tale. Unfortunately, it’s been turned into a dull, uneven movie by director Michael Bay (Bad Boys, Transformers).

There are times when the film wants to be a silly, screwball comedy. Rebel Wilson, in a typical Rebel Wilson role, comes in for comic relief as the girlfriend of the steroid abuser. She jokes about his small testicles and organises special medical treatment to help with his erectile dysfunction.

There are times when the film wants to be a gruesome crime drama. The kidnapped guy is bound, bashed, tortured and electrocuted for weeks. There’s even a scene where they drive a car over his head. It gets even worse in the later stages but I won’t reveal too much more.

It’s this inconsistency that makes Pain & Gain hard to take seriously. Am I supposed to be laughing at these three morons and the crazy plan they tried to pull off? Is that they why the cast the likeable Mark Wahlberg, Dwayne Johnson and Anthony Mackie? Or should this film leave me concerned about society, our constant pursuit of wealth, and, oh yes, the general incompetence of the police force (who are portrayed very badly)?

The film’s only interesting character, a level-headed private investigator played by Ed Harris, arrives too late and isn’t given enough screen time. It’s too bad. With major gaps in the story (such as why the multi-millionaire didn’t access his offshore money) and an over-reliance on narration to explain its characters’ mindsets, Pain & Gain is a forgettable disappointment.