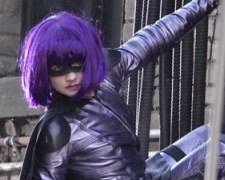 Kick-Ass 2 pushes the boundaries further than we’ve ever seen before. I’m not referring to the film’s violence but rather, to the character’s names. We’re already familiar with Kick-Ass (no issue there) but it could be hard making reference to Night Bitch and The Motherfucker when critiquing the film on ABC Radio. Oh, and there’s also the name given to the collective of bad guys – the Toxic Mega Cunts.

The original Kick-Ass, released in Australia back in April 2010, was a fun film. Many would agree. It had a strong, intricate plot and took the superhero genre in a slightly different direction. Instead of focusing on heroes with super powers or million-dollar gadgets, we followed ordinary folk who just wanted to put on a costume and make the world a better place.

Kick-Ass 2 tries to replicate that same amusing formula by introducing a bunch of new characters. The good guys are once again guided by teenagers Kick-Ass (Taylor-Johnson) and Hit-Girl (Grace Moretz) but they’ve been joined by other wanna-be heroes who want to clean up the streets. The most notable is an ex-mafia enforcer known as Captain Stars & Stripes (Carrey).

Most bad guys have some kind of fiendish plan to steal money, seize power or destroy the world. Not this lot. After his father was killed at the end of the first film, Chris D’Amico (Mintz-Plasse), now known as The Motherfucker, simply wants revenge. With the help of his father’s inheritance, he’s been able to assemble a muscle-heavy team of villains to get the job done.

Jim Carrey gave Kick-Ass 2 some good / bad publicity (take your pick) when he announced that, despite starring in the film, he wouldn’t be doing any promotional interviews. He felt he could no longer condone heavy violence in movies following the Sandy Hook Elementary School shooting in October 2012 (where 20 children and 6 adults were killed by a single assailant). I guess we won’t be seeing Carrey in a Quentin Tarantino film any time soon.

Those at the Australian Classification Board (ACB) didn’t seem to have as big an issue as Jim Carrey. The film has been rated MA and so is accessible to anyone who has made it to their 15th birthday. They only warn it contains “strong violence, coarse language and sexual references”.

The “strong violence” tag has already been attached to a dozen releases in 2013 (including Django Unchained, The Place Beyond The Pines, Pain & Gain) and I’d agree with the ACB in that, while the film does have its fair share of violence, it’s no worse than what we’ve seen many times already this year.

That said, the way the violence is used feels a little askew. The “good guys” have a mantra that they try to use as little force as possible when apprehending the “bad guys”. Captain Stars & Stripes likes to threaten people with his gun but DON’T WORRY EVERYONE – it’s not loaded so it’s ok. I was also unsure as to why Hit-Girl picked a fight with a petty thief and then proceeded to cut his arm off. Was it really necessary? Did her guardian (Chestnut), who is actually a police officer, not have a problem with this?

Writer-director Jeff Wadlow (Never Back Down) has missed a great opportunity to illustrate the very thin line that often separates heroes and villains. It seems a perfect fit for the film’s premise and the way that ordinary people, under the guise of a mask, take justice into their own hands. Are Kick-Ass and Hit-Girl doing the right thing?

Instead, Kick-Ass 2 is very black and white. The good guys get a “free pass” for their indiscretions and the bad guys are portrayed as sick monsters. This vibe comes through strongest during the film’s convoluted action finale. I’d also question a rape joke (you’ll know what I’m talking about) that is in extremely poor taste.

Unsure what it wants to say, Kick-Ass 2 is a forgettable action flick with just an occasional splattering of humour.