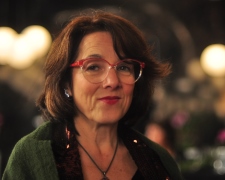 Gloria doesn’t contain a lot of story but it makes up for it with an abundance of character. I’m sure Chilean director Sebastián Lelio deserves his fair share of credit but the reason you’ll remember this film is because of the performance of star Paulina García. She won the best actress prize at the 2013 Berlin Festival and it’s easy to see why.

So let me do my best to describe Gloria. She’s fifty-something years of age and she’s been divorced for a decade. Her two children have moved out of home and she tries to catch up with them semi-regularly. She lives alone but she still likes to be social. In the film’s opening scene, we see her on the dance floor of a nightclub and trying to catch the attention of a particular guy.

The style of the film is somewhat fragmented. We zip between locations and get a glimpse of Gloria is each of those settings. It is then up to you to take in all of these observations and form your own conclusions about her. Is she happy? Is she lonely? Is she vulnerable? Is she just like you and me?

There’s one part of her life that is given more attention – her relationship with an ex-naval officer named Rodolfo (Hernández) who she also meets in a nightclub. The two are keen to spend time together… but there’s a catch. Rodolfo can’t seem to distance himself from his clingy ex-wife and his two unemployed daughters. It leaves Gloria unsure about their future and whether it’s a relationship she wants to fully invest in.

Having done the rounds at the Sydney and Melbourne Film Festivals last year, it’s nice to see Gloria getting a wider release here in Australia. I sense that some might be frustrated with the film’s lack of narrative momentum but it’s still an engaging character study that taps into feelings that are very difficult to put into words.