Review: All Is Lost 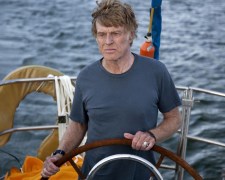 Having spent more than a decade trying to break into the film industry, writer-director J.C. Chandor, hit the mother-load in 2011 with his debut feature, Margin Call. He earned an Academy Award nomination for his script which chronicled 24 hours in the life of a major investment bank on the brink of collapse. The movie made my annual top 10 list and featured some sharp, insightful, compelling dialogue.

For his follow up, Chandor could not have come up with something any more different. Some films have lengthy sequences with just one actor (127 Hours, Cast Away) but All Is Lost goes a step further. This movie stars Robert Redford and that’s it. You won’t see another person on screen throughout the entire movie. From memory, the only other single-actor movie released in recent years was the tense thriller Buried with Ryan Reynolds.

Redford’s character, who is never identified by name, is an experienced sailor who has taken his small yacht out into the middle of the Indian Ocean. He wakes one morning and finds it flooding with water. The boat had struck a rogue shipping container (which had most likely fallen from a cargo ship) and left a decent sized hole in the ship’s hull.

What follows is a battle for survival. Spread over an 8 day period, we watch and observe this man as he uses all his nautical knowledge to repair the ship and overcome the treacherous seas. There are no flashbacks to provide background information. There’s no narration to help us get inside his head. There’s no talking volleyball to create dialogue. It’s just an old guy on a boat.

It’s no surprise that the film’s nature has divided audiences. It was the closing night feature at the Melbourne International Film Festival last August and was received with a mix of applause and laughter. Some saw it as a gripping, realistic tale that doesn’t bow to Hollywood conventions. Others saw it as a joke. They couldn’t believe they’d paid money to see a slow, drawn-out drama with zero dialogue (thankfully they had the after party to drown their sorrows).

I guess it’s time to use the famous Latin phrase – “caveat emptor” or “let the buyer beware”. I realise this movie isn’t going to be for everyone. If it sounds boring on paper, you’re likely to be bored in the cinema. Don’t see it. Don’t follow my recommendation. You’ll just be wasting two hours of your life.

That said, if you’re slightly intrigued by the premise, find the time to see All Is Lost. It’s taking a chance and trying to give us something different. You’ll also be treated to a superb performance from one of Hollywood’s finest actors, Robert Redford (The Sting). It’s an increasing struggle that he must endure, both physically and mentally, as each day passes.

The movie was shot in a variety of locations (some parts in a tank, other parts on the open seas) but you wouldn’t know when looking at the finished product. It comes together well. The beautiful cinematography captures not just the expansive landscape but also the claustrophobic nature of the situation. The sound team seemed to have captured every creak and groan emanating from the boat (it’s as if it has its own voice). The soft music score, which builds in the later stages, adds to the film’s emotional pull.

It’s been a competitive awards season and All Is Lost has turned out to be one of this year’s victims. Despite huge praise from some, the film earned just a single Oscar nomination for best sound editing. The most notable snub was for 77-year-old Robert Redford who missed out on a best actor nomination. It’s a big shame.

You can read my chat with director J.C. Chandor by clicking here.