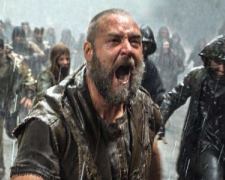 I can vaguely remember the story of Noah’s ark from my schooling days. He builds a huge boat, he puts two of every animal on board, and then a big flood wipes everything else out. It’s a yarn that most would be familiar with – even if they’re not considered “religious”.

It wasn’t until I saw this adaptation from writer-director Darren Aronofsky (Requiem For A Dream, Black Swan) that I realised just how little sense the story actually made. Noah learns about the flood after being given a “vision” in a dream. He then confirms this with his long lost grandfather (who has magic powers but only when it’s convenient – kind of like Gandalf in The Lord Of The Rings).

Noah didn’t build the giant ark on his own. That would have been impossible. He built it with the help of some giant talking rock monsters known as “watchers”. They’re been around since the days of Adam and Eve (a story that pops up repeatedly throughout the film). But how did he keep the animals asleep? The answer to that question was with the help of a super-dooper sleeping powder. It kept them unconscious for close to a year. They didn’t even need food and water!

It’s also important to remember that Noah had a wife, three sons and an adopted daughter. Given that they were going to be the only 6 human beings on the planet post-flood, you might wonder how the human race managed to survive. One of the sons could have slept with the adopted daughter (since that wouldn’t constitute incest) but then what happens to their siblings? How do they procreate?  It's a question that's deliberately, and too obviously, avoided.

I admire Aronofsky as a bold, original filmmaker… but this movie does not work (despite its impressive visuals). Ray Winstone plays the film’s keynote villain – a sinful, self-appointed king who eats animals and does as he pleases. Ok, so he’s not a nice guy, I get that, but what about the rest of the population? Why were they all tarred with the same brush?

Failing to create a credible story with credible characters, Noah is a film that is very hard to take seriously. Some scenes are laughable. Perhaps this won’t bother the world’s large Christian population who will be keen to see this iconic tale adapted for the screen. They proved me wrong ten years ago when Mel Gibson’s The Passion Of The Christ became one of 2004’s highest grossing movies (which I never would have predicted).

What am I supposed learn from this film? Should I become a vegetarian? Should I be more careful with my use of the planet’s resources? Should I be nicer to my fellow humans and not attack them using spears and makeshift guns? Should I be fearful of a vengeful God? Sorry Mr Aronofsky. Sorry Mr Crowe. You have not convinced me.