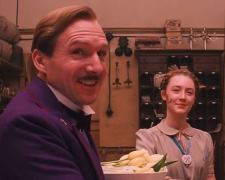 Even if you had no prior knowledge of this film and its content, you should recognise it as a Wes Anderson film within the opening few minutes. This isn’t because you’ll see his name in the opening credits (let’s pretend you’re looking away at that precise moment). It’s because of his familiar cast, his quirky storylines, and his distinctive style. All three of those boxes are ticked in The Grand Budapest Hotel.

Let’s start with the cast. Ralph Fiennes heads the list as the proud, sweet-smelling concierge at a mountain-top hotel. Newcomer Tony Revolori plays his protégé – a young lobby boy who is keen to learn from his experienced master.

The remaining actors only get a few minutes of screen time, if that. It’s hard to think of many other directors who could convince the likes of Bill Murray, Owen Wilson, Willem Dafoe, Adrien Brody, Jeff Goldblum, Edward Norton and Tilda Swinton (all who have worked with Anderson before) to take on such tiny roles. Even George Clooney makes a “blink and you’ll miss it” cameo! These folk are not doing it for the money (Anderson’s pockets aren’t that deep). They’re just relishing the chance to work with one of today’s “coolest” filmmakers.

As for the premise, I’m calling it a screwball crime caper with a layer of sentimentality. The concierge Gustave H. (that’s Fiennes) has taken possession of a near-priceless painting known as “Boy With Apple”. It was granted to him via the will of a wealthy 84-year-old, Madame D. (Swinton), who had been a regular guest at the Grand Budapest Hotel for two decades.

Madame D’s extended family isn’t happy – they wanted the painting for themselves. The authorities aren’t happy either – they believe Madame D’s death was no accident and have identified Gustave as the lead suspect. What follows is a humorous game of cat and mouse with Gustave, almost always wearing his purple concierge uniform, trying to evade those with guns and/or strong fists.

The main story takes place in 1932 but the film is bookended by two overlapping stories that take place in 1968 and 1985. I didn’t pick up on it at first (was too engaged by the story) but these three timelines are all shot with different aspect ratios. The bulk of the film uses the 1.33 ratio which was used on almost every movie up until the 1950s and on all television sets up until the creation of “widescreen” TVs. It’s seldom used today though. Most directors like to use every square inch of the big screen.

As for why Anderson has employed a 1.33 ratio… he’s always wanted to pay homage to the early years of cinema (of which he is a fan). It’s similar to what director Alexander Payne did with he recently released Nebraska, shot in black and white. There’s a little more to it than that though. The style acts as a metaphor for the story itself. Just as the Grand Budapest Hotel was slowly forgotten by its clientele (which we see in the touching 1968 story), so too was this type of filmmaking.

Injected with other Wes Anderson trademarks (e.g. symmetrical framing, lots of colour, shots of actors looking straight at the camera, crash zooms), The Grand Budapest Hotel is another feather in the cap of this wonderful director. It’s quaint, charming and poignant. It’s also a splash darker than previous Anderson collaborations. I can’t wait to see it again.