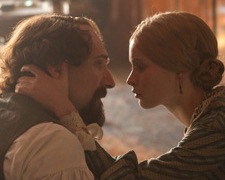 If you’re a lover of celebrity gossip, there are plenty of ways to get your fix in today’s society. You can buy a trashy magazine to find out who’s put on weight. You can turn to a devoted celebrity website to who’s had a wardrobe malfunction. You can buy a mainstream newspaper and see which Hollywood couple has broken up. You can scan through Twitter and see if there’s any truth in a movie star’s trip to rehab.

Our adoration for celebrities isn’t a new trend. The Invisible Woman takes us back to the later part of the 19th century and shows that gossip was as juicy and as powerful as it is today. While they couldn’t buy a copy of People magazine or check the latest posts on TMZ, they used an outlet that could be just as effective – word-of-mouth.

The subject matter here is Charles Dickens. Most will know him as the acclaimed author of such works as Great Expectations, Oliver Twist, David Copperfield and A Christmas Carol. What you may not know is that Dickens had a “scandalous” personal life. At the age of 45, he separated from his wife (with whom he’d had ten children) and began a relationship with an 18-year-old by the name of Ellen Ternan.

Based on the novel by Claire Tomalin, The Invisible Woman scrutinises this relationship from the two perspectives. Without any further knowledge, you might be a little cynical given the age difference. You may think that she’s after his money or that he’s after a short-term mistress. That’s not the case though. If there’s one fact that comes through clearly in this film, it’s that Dickens and Ternan loved each other a great deal.

The problem is that their relationship had to be kept a secret. If the public became aware, it would ruin Dickens’ reputation and potentially destroy his career. This was an era where divorce and adultery were severely frowned upon. The fact that Dickens’ was so famous only added to his difficulties. If he were to be seen in public with Ternan continually by his side, word would soon spread.

The second directorial effort of Ralph Fiennes (after 2011’s Coriolanus), The Invisible Woman is a satisfying romantic drama that explores a very complex relationship. To borrow a familiar phrase – their head says one thing, their heart says another. The lively Dickens (played by Fiennes) wanted the girl but also wanted to maintain his fame. The subdued Ternan (played by Felicity Jones) wanted the guy but also wanted to maintain her purity. Is there any chance at a happy ending here?

The film skips over a few details in the later stages but that doesn’t diminish what is an interesting tale.