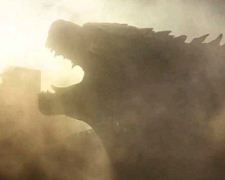 A Godzilla movie doesn’t require a lot of explanation. You should know what to expect. In this adaptation, we learn that that the United States’ nuclear weapon testing program in the 1950s had nothing to do with the protection of its own borders. They were trying, unsuccessfully, to kill this giant creature that lives beneath the sea. The good news is that Godzilla disappeared after that. The world’s oceans are expansive and he decided to keep a low profile. Well, until now…

This film didn’t win me over with its human characters. Bryan Cranston is the guy who forecasts doom and gloom but no one will take him seriously. Aaron Taylor-Johnson is a hero who keeps putting himself in harm’s way to save the day. Elizabeth Olsen is a mother trying to protect her young child. Ken Watanabe and Sally Hawkins are the scientists who have an explanation for everything. David Strathairn is the military guy who would prefer to use weapons as opposed to common sense.

These are characters we see continually in disaster movies. None of them are particularly charismatic, they all do what you’d expect, and you probably won’t care about their fate. That said, once you realise that the human characters aren’t the focus of the film, you can sit back and admire everything else.

In a similar vein to last year’s Pacific Rim, this is an epic “monster movie” and it’s been nicely shot by British director Gareth Edwards (Monsters). He teases the audiences with glimpses of the creature early on. You don’t get the expansive helicopter flyovers. We’re only seeing things from the perspective of the characters (or even from behind a mask in the case of Aaron Taylor-Johnson’s first full look).

The visual effects are impressive (a tsunami sequence is a highlight) but so too is the cinematography of Seamus McGarvey. You can tell that he’s trying to give this film style – from the use of camera angles, to the insertion of dust and flying debris. The score of Alexandre Desplat felt overbearing at times but you can the intention – to create something imposing, something epic.

One can argue that the film has some underlying messages too. Ken Watanabe’s character asks the question as to whether man controls nature or whether it is the other way around. Those going to see this film solely for its action sequences probably won’t care… but for others, you may be a surprised to find more depth than the trailers suggest.

The story needed more. I struggled to get up my head around the background material (how were they hiding the monster for so long in Japan?) and the attack plans didn’t seem all that logical (using trains then helicopters?). Still, there are enough positives in Godzilla to outweigh the negatives. It’s worth a look.