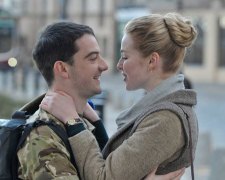 Two Scottish soldiers have returned to their home in Edinburgh after serving their country in Afghanistan. Ally (Guthrie) is keen to rekindle his relationship with his long-time girlfriend, Liz (Mavor). Davy (MacKay) finds himself smitten with a new love interest, Yvonne (Thomas). Rounded out the main are Rab (Mullan) and Jean (Horrocks), the parents to Davy and Liz and who are on the verge of their 25th wedding anniversary.

This isn’t a war drama or a romantic comedy. This is a musical. Using the same concept from the ludicrously successful Mamma Mia, it has been created entirely from the songs of a popular group. If you’re not an ABBA fan, don’t stress. The two musicals aren’t that similar. However, if you’re not a fan of the British band The Proclaimers, you might want to give this a miss.

The narrative has been structured around 13 of The Proclaimers more popular songs. They include “Sunshine On Leith” (well, obviously), “Letter From America”, “I’m On My Way”, and “I’m Gonna Be (500 Miles)”. It’s the creation of Stephen Greenhorn who wrote the stage musical (first performed in 2007) and has now adapted it for the big screen.

Directing the feature is Dexter Fletcher – who I most remember as Spike in the British television series Press Gang (which first aired back in 1989). He’s grown up, picked up a few more acting roles (Lock ,Stock & Two Smoking Barrels, Kick-Ass), and is now transitioning to a life behind the camera.

To make a great musical, you need to have your audience hooked from the very start. You open with some of your better songs and you provide a story that can flow smoothly between them. That’s not really the case here. These tunes aren’t as catchy (perhaps because I didn’t know them previously) and the dialogue is clunky.

Things improve a little in the second half. The characters seem to go through mood swings every 5 minutes but we get to know them in more detail and understand what’s driving them. The film also takes a few dramatic turns (thankfully moving away from the dancing, happy-go-lucky stuff). There are several sequences that tug at the heartstrings.

Some subplots are woefully underdone (such as Rab’s relationship with his long-lost daughter) and while I’m not convinced that the story as a whole is all that interesting, lovers of musicals and/or The Proclaimers may find themselves overlooking the flaws and enjoying this film a lot more than me.