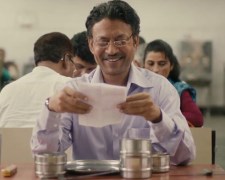 In the city of Mumbai, India, you’ll find a lunch delivery system that is both intricate and incredible.  The wife cooks the lunch in the morning, it is picked up by a guy known as a “dabbawala”, and it is transported directly to the desk of her husband at work.  Roughly 250,000 lunches are delivered each day via a mix of foot, road and rail.  Oh, and the term “dabbawala” is translated to “one who carries a box.”

It’s a cool concept that also makes for a very cool premise to a movie.  Saajan (Khan) is a widowed husband who is about to retire from the same government job that he’s held for 35 years.  He lives alone and generally keeps to himself.  He’s not looking to make new friends.  He’s not looking for a new romance.  Saajan does miss good food though.  Not much of cook, his evening meal is usually something he’s taken out of the packet and heated up in the microwave.

One day at work, Saajan is delivered a lunchbox.  It’s a mistake.  His lunches are supposed to come from a dodgy café that puts too much cauliflower in everything.  This one is different.  It’s a scrumptious, spicy curry (that’s just a touch salty) complete with ample amounts of naan bread.  He licks the bowls clean, repackages the lunchbox, and waits for it to be picked up by the dabbawalas and returned home.

It’s a scenario that is repeated the next day and the two people involved, finally start to catch on.  The person at the other end of the chain is Ila (Kaur) – a wife who seldom sees her workaholic, unresponsive husband.  She too realises her lunches are being misdelivered when her husband starts complaining (he’s getting the stuff from the café with too much cauliflower).  She writes a letter, slips it under the naan bread, and leaves it in her next lunch for the recipient to discover.

When I grew up, I remember having a pen pal.  I didn’t have a computer, the internet or a mobile phone.  The only way I could communicate with this person on the other side of the planet was to put pen to paper and craft a hand-written letter.  We often forget this is how we communicated for centuries.  It’s a nice touch to see The Lunchbox tapping into that fact.  Over the course of a few weeks, Saajan and Ila write letters back and forth (all of them concealed in the green lunchbox).  They each open up about their problems and they slowly get to know each other a little better.

Written and directed by Ritesh Batra, this is a sweet, heartfelt romantic drama about two people looking to connect with someone new.  It’s hard not to feel for both characters thanks to the superb performances of both Irrfan Khan (The Namesake) and Nimrat Kaur (Peddlers).  The film also makes effective use of the location.  We are shown the sights and sounds of India – from the busy, chaotic streets to the quiet, regimented workplaces.  It’s just a shame we can’t smell the food!

The film drags a little in the later stages (where Ila’s husband is pushed into the background) but all in all, this is an enlightening, feel-good movie that will almost certainly win you over.