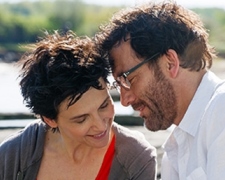 It’s a familiar blueprint when it comes to romantic dramas – boy gets girl, boy loses girl, boy gets girl.  In its defence, at least Words & Pictures is trying to elevate itself beyond that simple formula.  As the title suggests, it’s providing a rigorous debate about the value of words as opposed to pictures.  Which is more powerful?

The narrative is centred on two teachers in a public high school.  Jack Marcus (Owen) is a high-profile English teacher who has been there so long that he’s now part of the furniture.  Once a published author, he’s lost his motivation in recent years.  He struggles to fill his students with a passion for writing and a passion for great literature.  Jack’s battles with alcoholism (which he refers to as a “hobby”) only contribute to his problems and there are some who believe his teaching days are numbered.

Dina Delsanto (Binoche) is the school’s newest recruit – an accomplished artist who has accepted a role as an art teacher as somewhat of a “fall back” position.  She’d rather be displaying her work in galleries across the globe but she now suffers from the effects of rheumatoid arthritis and it has become extremely difficult for her to paint.  Never trained as a teacher, she is trying to work out how best to guide and inspire her very first class.

Jack and Dina clash in the staff room and it seems to provide them both with a much-needed spark.  What follows is a fun, engaging, term-long project where the students take a side and try to create a convincing argument.  A mere 1,300 words are contained in the Declaration of Independence and yet it was mighty enough to create a country.  On the flip side, a photo of an unknown man standing in front of a tank in Tiananmen Square showed the whole world that many were not happy with China’s political leadership.

As interesting as this discussion topic may seem, Words & Pictures can’t deliver as a movie.  The dialogue is really clunky at times.  When you see both Jack and Dina interacting with their students, you’d think you were watching a group of Harvard professors toss around ideas.  Everyone feels too intelligent and the situation doesn’t ring true.

The same can be said of the interaction between Clive Owen (Closer) and Juliette Binoche (The English Patient).  The pair had always wanted to worth together and you can sense that they’re enjoying their respective roles, but the scenarios crafted by screenwriter Gerald Di Pego (Phenomenon, Message In A Bottle) are too phoney, too manufactured.  This is evident right from the start during a silly game where the two characters try to outsmart each other with five-syllable words.

Directed by 74-year-old Australian Fred Schepisi (Six Degrees Of Separation, Last Orders), Words & Pictures aims high but falls into too many of the clichés that we’ve grown to expect from this genre.