Review: And So It Goes 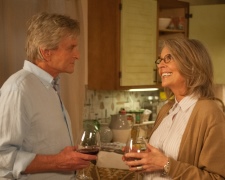 The opening scenes of this film are about one thing – portraying its leading character as the world’s biggest schmuck.  His name is Oren Little (Douglas) and he’s a rich real estate agent living a cushy, self-centered life.

To give you a sample of what this guy is like – (1) he takes up two car spaces on his block which forces a heavily pregnant woman to park several hundred metres away, (2) he abuses his staff at work and tells an elderly lady that he hopes she’s hit by a bus, (3) when showing off a house to a non-white couple, he treats them with complete disrespect.

Of course, the film can’t continue like this for its full 94 minutes.  We need something to make us feel happy, something to make us believe there’s a little good in everyone.  Two characters are added to the mix which will help transform Oren from bad guy to good guy.

The first is his next door neighbour – Leah (Keaton).  She’s a sixty-something-year-old singer who picks up gigs in small clubs.  She lost her husband several years ago and like Oren, she lives alone.  The second is his granddaughter, Sarah (Jerins).  Oren didn’t even realise he was a grandparent but when his estranged son rocks up on his doorstep asking him to take care of her for 9 months (while he goes to prison), he has no choice.

Director Rob Reiner made some terrific films across a variety of genres in the 1980s and 1990s – This Is Spinal Tap, Stand By Me, The Princess Bride, When Harry Met Sally, Misery, A Few Good Men, The American President.  Unfortunately, some of his more recent romantic efforts have floundered at the box-office – The Story Of Us, Alex & Emma and Rumour Has It.

Unfortunately, And So It Goes fit into that second group.  There’s a scene where Oren decides that he doesn’t want to look after his granddaughter and so he goes to great lengths to track down her mother – who turns out to be a drug addict.  He’s robotic-like.  He doesn’t even show a fleeting glimpse of doubt or remorse – despite the objections of everyone around him.  By creating such an awful human being… screenwriter Mark Andrus has put me in a position where Oren’s character shift is hard to take seriously.

There are glimpses of promise throughout the film – largely the heartfelt conversations shared between Michael Douglas and Diane Keaton as they open up about their respective characters’ feelings for the other.  It reminded me a little of Andrus’s career highlight – his fantastic, Oscar-nominated screenplay for As Good As It Gets.  Unfortunately, these moments are overshadowed by silly, tacky, seen-it-all-before moments such as sequence where Oren is forced to deliver a baby.  Really?  Is this is best comedy they could come up with?

It’s great to see another romantic comedy/drama pitched at older audiences (they’re often overlooked) but And So It Goes fails to creates something that is both memorable and meaningful.