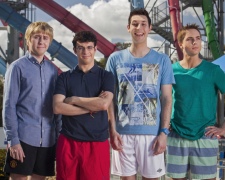 I enjoyed this opening line from critic Allan Hunter from Britain’s Daily Express – “Fans of puerile humour, excruciating bad taste and the comedy of extreme humiliation will love this sequel.”  I guess he’s talking about me… oh, and the folk who helped this film gross £2.75 million on its first day in the United Kingdom – the largest opening in history for a comedy!

If you’re new to the franchise, The Inbetweeners started out as a sitcom that first aired back in 2008.  Only 18 episodes were made across three years but the show became hugely popular.  To provide some perspective, the first episode was watched by just 321,000 viewers.  The final episode attracted an audience of 3,701,000.  It prompted a film spin off that was released back in 2011.  On At The Movies, Margaret Pomeranz described the characters as “a bunch of morons” and concluded by saying “I’m giving this one star really generously.  I don’t know why.”

Such comments highlight not just the divisive nature of the material… but also our very different senses of humour.  This is a style of comedy that uses material that is shocking, filthy, controversial, and politically incorrect.  Some will laugh loudly.  Others will be hugely offended.  When one of guys loudly accuses another of being a pedophile while in the kids section of a waterslide park, I wrote in my notebook – “is there any topic off limits?”  There’s even a Jimmy Saville joke!

To help bring you up to speed, the television series followed four hormonal teenagers who battled their way through the final years of high school.  They talked about nothing but getting laid… but they were completely inept when it came to women.  The first film saw them graduate and go on a “schoolies week” style holiday to Crete where they subjected themselves to an amplified set of misadventures.

When we meet Will, Simon, Jay and Neil this time around, we learn that a year has passed and they’ve all gone their separate ways.  That is until the Easter holidays arrive and the quartet use their student loan funding to go on a 4-week Australian holiday.  Jay is already in Australia as part of a gap year and promises that the women are amazing.  He proclaims to have slept with everyone – from Elle Macpherson to Dame Edna Everage!

Secondly, I do like these characters.  As idiotic as their actions are, you still get to see what makes them tick.  There are fleeting moments when they open up about their problems and friendships.  We see them more as real people and it illustrates the importance of having great friends.  The film is about a lot more than just Jackass-type gags.

It’s the end of the road for these guys with star Simon Bird stating at the film’s premiere that this will be the final chapter in the franchise.  I don’t think it’s quite as memorable as the first movie but it’s still a nice way to bow out.  The fact that’s in been shot here in Australia will also be a hook for local audiences.  You’ll get a glimpse of Sydney, Byron Bay, Marree, and even the Wet ‘n’ Wild water park on the Gold Coast.

You can read my interview with stars Simon Bird, Joe Thomas, James Buckley and Blake Harrison by clicking here.