Review: What We Do In The Shadows 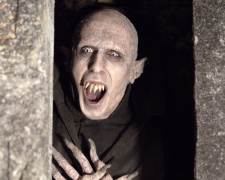 Vampires off get a dud rap.  Fictional films usually make them out to be nasty, evil, blood sucking creatures.  Dracula Untold, a new film to be released in a few weeks, looks like more of the same.  There are some exceptions though.  The recent Twilight franchise showed that not all vampires are villainous.  Some are sweet and friendly… and good in bed apparently.

What We Do In The Shadows has been funded by the New Zealand Documentary Board and follows a small crew as they get up close with a group of eccentric vampires who share a home in suburban Wellington.  In case you’re wondering about the well-being of the film crew, they’ve all been given assurances by the vampires that they won’t be eaten.  Just to be safe, they’re also wearing crucifixes.

This is an intriguing documentary that will be of interest to anyone curious about the vampire world.  It confirms a lot of the basic things we already know about them – they can’t go near sunlight, they can’t go into a building without being invited in, and they can’t see themselves when they look into a mirror.

Where this documentary shines is that it creates empathy for its subjects.  It’s not their fault that they were bitten centuries ago.  They’re just trying to make the best of the situation.  How would you feel if you weren’t able to see a sunset and then post it on Instagram?  The best these vampires are able to do is watch videos of the sun on YouTube.

The film also highlights that while vampires aren’t technically alive, they still display “human” like qualities.  They argue about who’s going to do the dishes (they’ve been piling up in this house for 5 years) and they get cranky when their alarm clock goes off at 6 o’clock (that’s PM, not AM).  It’s not all grim though.  They still find time to go clubbing and find a nice girl to take home (well, for different reasons).

Filmmakers Jemaine Clement and Taika Waititi have focused their attention on the day-to-day misadventures of vampires and I like the approach.  Vladislav, Viago and Deacon are not afraid to open up and speak on camera.  They’re smart guys with a decent sense of humour.  It’s just a shame we don’t hear more from 8000-year-old Petyr who spends much of the film cooped up in the basement inside his stone coffin.

It all culminates with some exclusive footage from The Unholy Masquerade – an annual event where vampires, zombies, werewolves, and other members of the “undead” come together for a huge party.  While they’ve secured a great venue this year (the spacious function room at the Mt Victoria Bowls Club), the night doesn’t quite go to plan.  I won’t spoil it through.  It’ll be new to anyone who didn’t read about it in the news.

We don’t see a lot of documentaries make it into Australian cinemas and so hopefully What We Do In The Shadows will perform strongly at the box-office and put the bite back into one of my favourite genres.