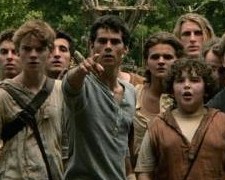 A teenager (O’Brien) wakes up and finds he is ascending in a dirty, poorly lit elevator.  He has no memory of his past.  He can’t remember his name.  He doesn’t know how he got there.  The elevator reaches its destination and comes to an abrupt halt.  The door opens and he finds himself in an expansive, grassy field surrounded by high walls.  He is welcomed by a group of fellow youngsters who do their best to explain the situation.

They are all prisoners in the centre of a ridiculously elaborate maze.  Each morning, the door to the maze opens and the fastest runners check every route for a way out.  There are moving walls, hundreds of narrow passageways, and a few large, open chambers.  You don’t want to be in the maze at night through.  It’s at this time when a group of mysterious creatures, known as “grievers”, go in search of human prey.

I like movies that don’t muck around with long-winded introductions.  The Maze Runner establishes its intriguing premise within a matter of minutes and it held my attention for its full two hour running time (impressive since I’m easily distracted).  The film’s key hook is clearly the aura of mystery that it creates.  Where did the kids come from?  Who built the maze?  Why are they there?

Just as interesting is the dynamic that has developed between the characters.  They’ve been thrown into this isolated environment and have been forced to create their own self-sustaining society without adult supervision.  They live by three key rules – pull your weight, don’t harm anyone, and never enter the maze unless you’ve been chosen.

While they all realise the importance of working together to find a way out, there’s still tension between certain individuals.  Not everyone agrees on the approach and some recent decisions by the self-appointed leaders have proved divisive.  Will they be defeated by the maze… or will they be defeated by each other?

I was lamenting last week at a lack of originality when it came to recent teen-oriented adventures – The Hunger Games, Divergent and The Giver all felt like they were covering familiar ground (dystopian future, controlling governments, assigned jobs).  Okay, so I admit there are a few similarities here.  However, there are enough points of difference to give this a fun, fresh, original kind of vibe.

When director Wes Ball was meeting in the early stages with studio executives, he pitched the film as “Lord of the Flies meets Lost.”  It’s an apt way of describing the absorbing storyline.  It’s not easy condensing a book for the big screen but the screenwriting team have done a great job with James Dashner’s 2007 novel.  Whether you’re talking about the characters or the labyrinth itself, this is tale rich in detail.

Reportedly shot on a budget of just $30m, this is a film that received great value for money from its set decorating teams and visual effects artists (it’s hard to work out what’s real and so I don’t know who deserves the more credit).  To put that budget into perspective, the recent Transformers: Age of Extinction cost roughly seven times as much.  Also worth a mention is composer John Paesano. His powerful music score also adds to the film’s sense of adventure.

Ball sat through thousands of auditions before settling on what is a terrific group of young actors.  Dylan O’Brien (Teen Wolf, The Internship) brings the right mix of strength and vulnerability to his leading role.  He’ll be a name to follow in the near future.  You’re also likely recognise Will Poulter (The Chronicles Of Narnia, We’re The Millers) and Thomas Brodie-Sangster (Game Of Thrones, Nanny McPhee) who are both very good.

On a lighter note, I was amused to read that Blake Cooper (who plays Chuck) landed his supporting role after bugging Wes Ball on Twitter for an audition.  Guess it proves there are many ways to make it in Hollywood.  Cooper took a chance and was rewarded.  Hopefully people take a chance on The Maze Runner and feel the same way.