Review: Sin City: A Dame To Kill For 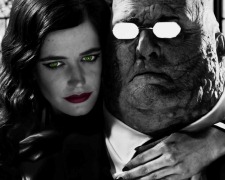 It’s been more than 9 years since the original Sin City so to provide a quick refresher… the film was based on a comic book series from Frank Miller, told three short stories that were interwoven, was shot in black and white with a small splash of colour, featured a huge Hollywood cast, and was shot almost entirely using special effects.

What I’ve just said also describes this sequel, Sin City: A Dame To Kill For.  The first story is that of a happy-go-lucky poker player (Gordon Levitt) trying to make a fool out of a high profile government senator (Boothe).  The second is that of a conniving woman (Green) who has convinced a former lover (Brolin) to murder her current husband.  The third is that of a stripper (Alba) and her quasi-bodyguard (Rourke) looking to avenge the death of an old flame (Willis).

Some may describe it as corny but the film is heavy on narration and the characters speak like they’re reading from a comic book.  For example, there’s a great line when Josh Brolin tells Eva Green that “I was born at night… but I wasn’t born last night.”  There are also plenty of descriptive metaphors such as a moment when a character reaches for his gun and notes that it “barks and bites” in his hands.

The film has earned an MA rating here in Australia for its “strong violence”, “sex scenes” and “sexualised violence” (the later much be some kind of combination of the other two).  It’s a fair rating.  Pulling out someone’s eyeballs and crushing someone’s head with your bare hands isn’t exactly for everyone.  There’s a style to it through.  Directors Frank Miller and Robert Rodriguez aren’t trying to make something with blood and gore.

I was hugely impressed by the original film given it was something that we hadn’t seen on the big screen before.  This time around, I wasn’t as enamoured.  The narration feels overdone and the stories aren’t as captivating.  Of the cast, Powers Boothe was my favourite with his portrayal of a corrupt, villainous senator.  You really want to see him get what he deserves.  The remaining cast members don’t make as strong an impact as you might expect.

The film was a huge box-office flop when it debuted in the United States a few weeks ago.  It earned just $6.3m on its opening weekend and will struggle to recoup its $65m budget.  A variety of reasons have been sited (including the delay between the two films) but the bottom line is that doesn’t seem to have offered what the paying public are looking for.