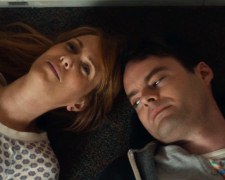 Released this week, Josh Lawson’s The Little Death covers a subject matter that we don’t see often on the big screen – sex and fetishes.  Perhaps it’s because we don’t like to talk about such stuff publicly.  Perhaps it’s because film financiers don’t want to take a chance on edgier material (they’d prefer to stick to safe, PG stuff).

It’s a nice coincidence that we have another release this week in Australia that also covers “taboo” topics that we don’t see much of in mainstream cinemas.  The Skeleton Twins is an equally dark comedy that explores suicide, depression, and child abuse.  It’s the second feature of writer-director Craig Johnson and it took home a screenwriting award at the 2014 Sundance Film Festival back in January.

The story centres on two middle aged twins, Milo (Hader) and Maggie (Wiig), who have drifted apart and haven’t seen each other in close to a decade.  They are brought together after Milo unsuccessfully attempts to commit suicide.  We’re not quite sure why.  His suicide note simply read “to whom it may concern, see ya later” followed by a smiley face.

Maggie suggests to Milo that he come and spend some time with her in New York so he can clear his head and get things back on track.  It’s a gesture that serves more than one purpose.  We learn that Maggie has been battling her own demons.  She tells everyone that things are great but she too is struggling to find her place in the world.  Suicide is at the forefront of her mind.

They combine to create what is a heavy comedy.  There were plenty of awkward moments during the preview screening I attended where some audience members laughed loudly while others maintained a deadpan expression.  It’s a change of pace for these two Saturday Night Live stars who we’re used to seeing in much “lighter” films (Hader – Superbad, Hot Rod, Tropic Thunder, Wiig – Walk Hard, Bridesmaids, Despicable Me).

It’s a moral that’s covered repeatedly in films – The Skeleton Twins is trying to highlight the value of human interaction.  Maggie and Milo haven’t been in touch for ten years but it doesn’t take long for the connection to reform and the memories to come flooding back.  Through the power of conversation (and a bit of singing), they can help each other without actually realising it.

I wasn’t a fan of the finale.  It felt too conventional given much the unorthodox material that preceded it (without giving too much away).  Aside, this a strong feature that successfully blends comedy and drama while also exploring a very tough subject.