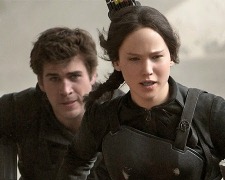 To borrow the term from a friend, this latest instalment in the Hunger Games series is suffering from “part-one-itis.”  It’s an affliction that has plagued other successful franchises including Harry Potter, Twilight and The Hobbit.  I enjoyed the first two Hunger Games flicks.  I’m confident I’ll enjoy the final chapter (due for release in November 2015).

Unfortunately, this one isn’t up to scratch.  By splitting Suzanne Collins’ concluding novel into two movies (so as to double the box-office), we’re left with a film that never gets out of first gear.  It’s heavy on padding and light on action.  Its finale isn’t even close to matching the excitement from the earlier releases.

To provide a quick refresher, the Hunger Games series is set in a world with much inequality. The capital city is home to a group of wealthy families who live a comfortable life full of many luxuries.  The neighbouring districts live in poverty and their citizens work like slaves so as to serve the capital.

Each year, the capital holds a televised “game” where two representatives from each district fight to the death in a huge arena.  At the end of the last film, Catching Fire, some of the competitors managed to escape the game and fled to a far-off district.  They were led by the heroic Katniss Everdeen (Lawrence).

That brings us to the start of Mockingjay – Part 1.  The actions of Katniss have helped spawn an uprising with the districts.  They are now united in their attempts to fight back against the controlling capital and to overthrow the villainous President Snow (Sutherland).  Don’t get too excited though.  You’ll have to wait until Part 2 before the uprising hits full stride.

Instead, this instalment is focused more on planning and preparation.  Katniss is persuaded to shoot some propaganda videos which will be broadcast to the other districts to help lift their spirits.  She also must work out how to rescue her “close friend” Peeta Mellark (Hutcherson) who is being kept against his will in the capital.  Oh yeah, and there are sequences where she rescues her sister’s cat and another where she goes walking in the forest with her old flame, Gale (Hemsworth).

I do like this franchise, honestly!  It’s taking some important concepts (controlling governments, tainted media, and supressed citizens) and packaging them up as an entertainment for younger audiences.  It’ll sell a gazillion more tickets than a documentary on the equally suppressive regime in North Korea.  It’s also provided the confidence for studios to adapt similar novels for the screen (e.g. Divergent, The Giver).

Mockingjay – Part 1 is sure to have its passionate fans.  I’m thinking of those who loved the novel and will be thrilled just to see it realised on the big screen.  There are also those who are embracing this newish concept of splitting a novel into multiple parts.  It allows you to create cliff-hanger type endings similar to what we see when a popular television drama is wrapping up its season.

The themes are appealing, the characters are intriguing and the visuals are impressive.  It’s just a shame about the unnecessarily slow pace.