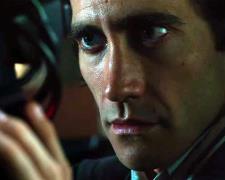 Unemployed for quite some time, Louis Bloom (Gyllenhaal) has found a new profession to sink his teeth into.  Using a police scanner and a cheap video camera, he drives the streets of Los Angeles at night and tries to capture exclusive video footage of “newsworthy” events such as fires and car crashes.  He can then sell the footage to television networks to use on their much-watched breakfast programs.

There’s an early sequence where Louis arrives at the scene of a brutal carjacking.  Paramedics are treating the victim who is covered in blood and in critical condition.  A rival cameraman (Paxton) is also in attendance and is capturing the events from a few metres away.  Perhaps this is out of respect for the driver.  Perhaps because he knows news stations don’t want footage that is too unsettling.

Louis seems to have a different view of things.  He jams the camera in the face of the victim and seems to be taking pleasure from the gory footage.  It’s a moment that sums up Louis.  He’s a strange, socially awkward guy who doesn’t seem to know the difference from right and wrong.

Adding to the film’s odd premise is the fact that Louis has an enabler.  Nina Romina (Russo) is the news director for a breakfast program that is struggling in the ratings battle and is keen to use Louis’s material.  She explains that the best stories are those that involve minority perpetrators and white, middle-class victims.  Her idea of the perfect footage would involve “a screaming woman running down the street with her throat cut.”

Nightcrawler follows Louis as his moral compass goes further and further awry.  He tampers with a crime scene so as to get a better camera angle.  He sabotages his competition so as to increase his industry standing.  He uses his newfound power as a way of controlling Nina and a newly hired intern.  The fact that he’s become such a success is truly scary.

Written and directed by Dan Gilroy (a screenwriter on Real Steel and The Bourne Legacy), Nightcrawler does have something to say about the public’s fascination with certain types of news stories.  It comes back to the old adage – “if it bleeds, it leads.”  I wasn’t fully convinced by some of the behind-the-scenes newsroom stuff but thankfully, this isn’t the real focus of the film.  It’s more of a character study… and an unsettling one at that.

Jake Gyllenhaal (Donnie Darko, Brokeback Mountain) delivers a chilling performance as Louis Bloom.  He speaks in a robotic like manner and continually uses phrases which feel like they’re straight out of a self-help book.  When you throw in his passive aggressive personality, you’ve got one of the creepiest characters that we’ve seen on screen this year.  You don’t want this guy getting the upper hand on you!

An interesting piece of trivia about the film are the number of family connections.  Working behind the scenes are Dan Gilroy’s two brothers.  Tony Gilroy, who most will know as the Oscar nominated writer-director of Michael Clayton, is credited as a producer.  John Gilroy serves as the film’s editor (building on his resume which includes films such as Warrior and Pacific Rim).  In front of camera is Rene Russo (Get Shorty, The Thomas Crown Affair), Dan’s wife of more than 22 years.

The screenplay gets a little too far-fetched during the concluding stages but the positives clearly outweigh the negatives with Nightcrawler.  It’ll give you a good, hard shaking.

You can read my chat with writer-director Dan Gilroy by clicking here.