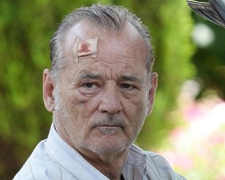 Clint Eastwood in Gran Torino.  Jack Nicholson in As Good As It Gets.  Alan Arkin in Little Miss Sunshine.  These are just a few names that you’d find on a list of cinema’s great “grumpy old guys”.  Now in his mid-60s, it seems iconic actor Bill Murray (Lost In Translation) wants his spot on that list.  Writer-director Theodore Melfi has provided the vehicle in what is his first feature film, St Vincent.

Murray plays Vincent – an elderly man who pretty much does whatever he wants.  He drinks, he smokes, he gambles, and he goes to strip clubs.  Vincent doesn’t have a job and so all of his activities have been funded by drawing down on his home loan.  Unfortunately, house prices have plummeted and the bank isn’t giving him another dime.

Vincent’s got a few more problems too.  He’s been sleeping with a Russian prostitute (Watts) who is now pregnant with his child.  He owes a significant sum of money to a loan shark (Howard) after losing at the local race track.  He’s also months behind on his payments to a respite centre where his wife, suffering from dementia, now resides.

As is the case with most of cinema’s great “grumpy old guys”, Vincent goes through somewhat of a transformation.  The catalyst is a shy, insightful kid named Oliver (Lieberher) who has moved in next door with his single mother, Maggie (McCarthy).  Maggie has to work long hours at a hospital and so she’s reluctantly asked Vincent to babysit Oliver for a few hours each day after school.  Don’t think Vincent is doing this out of the kindness of his heart.  He’s demanding $12 an hour as part of his conditions.

St Vincent is designed to be a crowd pleaser.  It finished 3rd in voting for the People’s Choice Award at the Toronto Film Festival back in September (that’s a big honour).  The film’s opening half is largely comedic with Bill Murray uttering insult after insult.  It’s his preferred method of pushing people away.  He lives alone and doesn’t want anyone to get beneath his tough exterior.

Events become more dramatic in the second half.  There are some touching moments that may leave some audience members reaching for tissues.  There’s a particularly powerful scene where Maggie opens up to Vincent about her uneasy past (she fled from her cheating husband) and her concerns for Oliver going forward.  It all leads to a conclusion that is both sweet and poignant.

The film’s heart is in the right place but the story is jumbled.  There are some problems, such as Vincent’s run-in with the loan shark, that don’t add value and are resolved far too easily.  Other issues aren’t even followed through at all (such as when Vincent “borrows” money from Oliver’s new bank account).  I was also baffled at the “romance” (for use of a better word) between Vincent and the Russian prostitute.  What did they see in each other?

The bottom line though – I’ll always pay money to see a Bill Murray movie.  Yeah, the script has a few flaws but it’s nice to see Murray interact with Melissa McCarthy (in a rare dramatic role) and bond with young actor Jaeden Lieberher (in his first big screen performance).  It’s perfect fare for the Christmas holidays here in Australia.