Review: Into The Woods 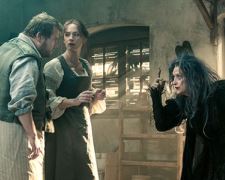 With music and lyrics by Stephen Sondheim (West Side Story, Sweeney Todd), Into The Woods was a successful, much acclaimed musical that was first performed on Broadway in 1987.  Whilst it didn’t take home the Tony Award that year for best new musical (that honour went to Phantom Of The Opera), it’s a show that has proven its greatness over time.  It’s been performed across the globe and has gone through numerous revivals.

I haven’t seen the live musical myself but on paper, it sounds fantastic!  It takes the heroes from several Brothers Grimm fairy tales and brings them together as part of a new adventure.  A baker (Corden) and his wife (Blunt) have been cursed by a witch (Streep) and are unable to have children.  The curse will only be broken if the couple obtain four ingredients that are required by the witch for an important potion.

Firstly, they need a cow as white as milk.  This can be obtained from Jack in exchange for some dodgy magic beans.  Secondly, they need a cape as red as blood.  Little Red Riding Hood is the perfect candidate but she won’t be handing it over without a fight.  Thirdly, they need hair as yellow as corn.  Rapunzel has plenty to spare but it won’t be easy locating her tower.  Finally, they need a slipper as pure as gold.  This is where Cinderella comes into the frame.

There’s a moment in almost every fairy tale where the bad people are punished and the good people “live happily ever after”.  The catch with Into The Woods is that this moment presents itself in the middle of the story as opposed to end.  The show’s second act flips the whole narrative on its head and looks at things from a different, more realistic perspective.  It illustrates life’s many contradictions and the trouble in differentiating “good” from “bad”.  Further, it shows that not all of these characters deserve to live happily ever after.

Director Rob Marshall is no stranger to a big screen movie musical.  His first feature film, Chicago, won 6 Academy Awards including best picture in 2003.  Marshall was heavily favoured to win best director that year but lost to Roman Polanski (The Pianist) in a major upset.   His next musical outing was anything but successful.  Nine, released back in 2009, was savaged by critics and tanked at the box-office.

There are a lot of good reasons to see Marshall’s cinematic adaptation of Into The Woods.  The film opens with a brilliant 15-minute musical number that introduces us to all the major characters.  Having had to endure the horrendous Annie several weeks ago, this opening reminded me of how wonderful musicals can be.  The casting is great, the voices are clear, and the plot is easy to follow.  The creativity shown with the overlapping lyrics and storylines also put a smile on my face.  It’s a lot of fun.

It’s a well written musical but the character who gets the best lines and the most laughs is the baker’s wife.  It’s a role that won Joanna Gleeson a Tony Award in 1988 and Imelda Staunton an Olivier Award (the London equivalent) in 1991.  Emily Blunt (The Devil Wears Prada) steps into the character’s shoes here and is wonderfully good.  So too is Chris Pine (Star Trek) who appears in the film’s best song – a duet where two princes agonise about the women in their life who are “just out of reach”.

As much as I loved the lead up, the film struggles to sell the messages contained in its meaningful conclusion.  I’m worried that audiences will be divided about the sudden change in tone (which should have been darker to make it more obvious) and the rush to resolve so many subplots (characters are dying at a rapid pace).

The theatrical version was able to use certain techniques to assist its cause.  For example, the actor who played the villainous wolf also played Cinderella’s charming prince.  It was a way of showing that while their characters may seem very different, their personalities are actually quite similar.  I’m not saying that Marshall should have used the same actor for the two roles in the film (it would have been tricky) but it highlights that important details have been lost in the translation from stage to screen.

Named as one of the year’s top 10 films by the American Film Institute, Into The Woods is ultimately a film that entertains but also underachieves.