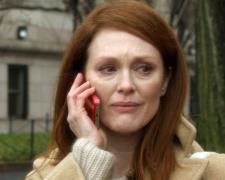 What do Kim Basinger, Hilary Swank, Catherine Zeta-Jones and Nicole Kidman have in common?  They’ve all prevented Julianne Moore from taking home a coveted 13 ½ inch gold plated statuette.  However, after two decades of great performances, it seems the “movie gods” are finally set to smile on Moore.  Having won a string of lead-up awards, she’s a ridiculously short priced favourite to win the Oscar next month for her lead performance in Still Alice.

The film centres on a 50-year-old woman who is battling the early stages of Alzheimer’s disease.  When we first meet Alice (Moore), we learn that she’s a highly regarded linguistics professor at Columbia University.  Her husband, John (Baldwin), is also a college professor and they have three children who have all moved out of home.

Alice is sharp enough to realise that something isn’t quite right with her memory.  She loses her train of thought while giving an important lecture.  She becomes disorientated while going out for a late afternoon jog.  Several trips to a specialist confirm Alice’s deep-seeded fears.  The indignity she soon feels is summed up in a comment to her husband – “I wish I had cancer.”

This film is about more than just feeling sad and sorrowful.  It’s provides an insightful look at how such a disease can affect the family dynamic.  Alice is told that Alzheimer’s is genetic and that there’s a 50/50 chance that each of her children will go through the same experience.  The moment she shares this news with her kids makes for tough viewing.  If you were in their shoes, would you want to know this?  Would then want to have a genetic test to know for sure?

The disease also puts a strain on John.  He wants to be there and support his wife… but there’s only so much time he can take off work (particularly since he is now the sole breadwinner).  When a lucrative job offer arises in another state, he’s left with a tough decision to make.  How much of his own life and career is he prepared to sacrifice?  When is the right time to get a live-in carer or perhaps even put Alice in a nursing home?

Julianne Moore is wonderfully good as Alice and her performance will bring a tear to many eyes.  As part of her four months of research, she met with not just those suffering from the disease but also researchers, clinicians and therapists who deal with it every day.  She wanted to create a credible character that depicts the effects of Alzheimer’s as accurately as possible.  Moore is helped by a great supporting cast that includes Alec Baldwin, Kristen Stewart, Kate Bosworth and Hunter Parrish.

Based on the novel by Lisa Genova, Still Alice has been brought to the screen by the writing-directing team of Richard Glatzer and Wash Westmoreland.  It’s a neat twist of fate that the film is being released in Australia on the same date as The Theory Of Everything.  Just like Stephen Hawking, Glatzer suffers from amyotrophic lateral sclerosis (ALS).  He has lost the ability to speak and can no longer use his hands.  The only way he could communicate with the cast and crew was by typing on an iPad using his right toe.  The fact he was able to make such an affecting movie is inspiring.  There’s no other word for it.

It’s a shame the film itself hasn’t received more recognition during the awards season.  I’d argue that it’s a lot more balanced, engaging and moving than the likes of The Imitation Game and American Sniper.  Put it high on your “must see” list.