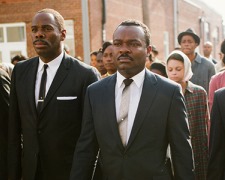 Biopics are featuring strongly this awards season.  The Imitation Game told the story of cryptanalyst Alan Turing.  The Theory Of Everything centred on famous cosmologist Stephen Hawking and his first wife, Jane.  American Sniper took us inside the world of the Navy SEAL Chris Kyle.

Selma may have only just snuck into the best picture category for the upcoming Academy Awards (it has only one other nomination) but it’s superior to the three abovementioned films.  Its focus is a lot narrower too.  Instead of trying to condense Martin Luther King’s whole life into a single movie, writer Paul Webb and director Ava DuVernay have concentrated their attention on events that took place in Selma, Alabama in early 1965.

Many believed the passing of the Civil Rights Act in 1964 would end segregation but the African American citizens of Selma were continually being thwarted by local government officials in their efforts to become registered voters.  There’s a scene early in the movie where King (played by David Oyelowo) sums up why the matter was so important.  Firstly, it would provide African Americans the power to vote out those officials who continually discriminated against their community.  Secondly, it would give them the right to serve on juries and help prevent black citizens from being falsely convinced by their “all white” peers.

The most fascinating element to this film is its exploration of tactics.  If I wanted to protest an issue today, I’m not going to achieve much by walking down a street and holding a simple placard.  King and his supporters knew that the best way of winning this battle was through the media – both newspapers and television.

Their strategy was to organise a series of peaceful protests featuring a few hundred marchers.  That itself wouldn’t make headline news.  The critical “catch” was that King hoped the police would retaliate with unwarranted violence.  It was a big reason why they’d picked Selma as a town.  The County Sheriff was known to act outside the law and Governor George Wallace (Roth) did little to stop him.

If images were to be broadcast across the nation of white state troopers attacking unarmed black men and women, it would expose the problem and create sympathy for the African American cause.  President Lyndon Johnson (Wilkinson) would be left with no choice but to introduce further legislation guaranteeing African Americans the right to vote.

Not everyone agreed on this approach.  The film makes time to illustrate the division and uncertainty that existed on both sides of the fence.  There were some African Americans who didn’t appreciate King barging into Selma and trying to take charge.  Back in Washington, President Johnson was sensitive towards their plight but as he wanted to focus on other issues, he quietly used the FBI to hinder King’s endeavours.

I’ve read a few “fact check” articles that have tried to discredit elements of the film (the most notable being the interaction between King and President Johnson).  Perhaps the film isn’t 100% accurate but I’d passionately argue it’s a lot more balanced than others in this year’s Oscars race.  It’s also not afraid to show King’s flaws.  Yes, he won the Nobel Peace Prize… but yes, he also cheated on his wife.

Skilfully directed by Ava DuVernay and featuring a wonderful leading performance from David Oyelowo, Selma pulls back the curtain on a riveting piece of U.S. history.  Just as importantly, it highlights the value that can be achieved from a successful, well-organised protest.