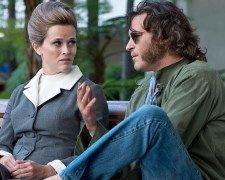 The year is 1970, the setting is California, and the leading character is Larry “Doc” Sportello (Phoenix).  He’s a paranoid private investigator who has been approached by an ex-flame (Waterston) to look into a supposed crime.  It’s rather complex… but the bottom line is that a millionaire property developer is about to be kidnapped and placed in a mental asylum.

What follows is a somewhat bizarre journey that goes off on several unexpected tangents on route to the finish line.  There’s a big cast too.  Owen Wilson is an undercover informant who faked his own death and is now playing the saxophone in a surf band.  Josh Brolin is an aggressive police detective who has a love for chocolate-coated bananas.  Martin Short is a cocaine snorting dentist who is sleeping with most his female staff.  Benicio del Toro is a relaxed lawyer specialising in marine law.

If it all sounds rather strange… well... that’s because it is.  Doc spends most of the film under the influence of drugs and it’s hard to work out whether you’re watching a complex thriller, an elaborate fantasy, or something in between.  It reminded me of Hunter S. Thompson’s Fear & Loathing In Vegas which was adapted for the screen by Terry Gilliam in 1998 and which featured Johnny Depp in the lead role.  Curiously, del Toro played a lawyer in that film too.

Inherent Vice marks the 7th feature film of writer-director Paul Thomas Anderson.  He’s my favourite filmmaker working today and I’m enamoured with his previous works (especially Boogie Nights and Magnolia).  It’s hard to describe why though.  It’s like asking someone about why they love a certain author, musician, actor or painter.  To borrow a line from The History Boys, “it’s as if a hand has come out, and taken yours.”

Anderson’s trademarks include long takes, beautiful dialogue, great soundtracks, and an ever-so-slowly moving camera.  All of these attributes are on display in Vice.  It’s based on the novel by American author Thomas Pynchon of whom Anderson has been a long-time fan.

When the film premiered at the New York Film Festival last October, critics were describing it in all sorts of ways – “groovy and richly funny” (Variety), “entertainment of a high order” (Time) “ultimately pointless” (Vanity Fair), and “incoherent” (Slate).  At least it had a few passionate fans within the Academy.  Anderson picked up an Oscar nomination for best adapted screenplay (losing to Graham Moore for The Imitation Game).

If you’ve got a warped, off-beat sense of humour, you should like this.  It’s not on the same level as The Big Lebowski (the pinnacle of stoner comedies) but it’s a worthy effort.  The cast deserves credit too for creating such memorable characters.  Like so many others though, I did struggle to keep up with its broad themes.  I had no idea what the narrator was rambling on about.  Was it just an elaborate joke?  Or was I missing a deeper, more profound message?  A second viewing will be required.