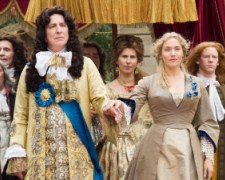 Most would know 69-year-old Alan Rickman as the English actor who has appeared in such films as Die Hard, Sense & Sensibility, Galaxy Quest and Love Actually.  Most wouldn’t know that Rickman once directed a film.  The Winter Guest was a low budget feature that starred Emma Thompson and Phyllida Law.  It was released back in 1997 and made just under $1 million at the U.S. box-office.

Rickman had always wanted to direct again.  Unfortunately, he was side tracked by his role as Professor Severus Snape in the Harry Potter franchise which ran for 10 years.  It wasn’t long after Potter wrapped up that he came across a script from first-time writer Alison Deegan.  Attracted to the freshness of her writing, it was just the project he wanted to sink his teeth into.

The story is set in Paris, 1682 and while it is a work of fiction, it does use characters and locations that many will be familiar with.  King Louis XIV (Rickman) is the process of building a large palace in the country town of Versailles that is to become the centre of French politics.  The grounds include an expansive garden and when the film opens, Louis is looking for a specialist gardener to create a feature landmark.  He’s after something that could be regarded as “a window to perfection.”

One of the King’s offsiders (Schoenaerts), André Le Notre, is put in charge of the project and after a lengthy selection process he makes the controversial choice to go with a woman, Sabine De Barra (Winslet).  Her ideas took chances and ignored convention.  Unlike her fellow gardeners, Sabine was someone who didn’t believe in “order over landscape.”

There are a number of elements to the storyline, most of which revolve around Sabine.  We get glimpses of her troubled past in an effort to try to understand who she is today.  We follow her search for love that leads her into the arms of André, a man already trapped in a peculiar marriage.  We see her battle unions and her competitors in an effort to see her stunning garden completed in time.

The film culminates with a delightful sequence where we finally get to see Sabine’s garden.  It includes a finely choreographed dance number and a great film score from young composer Peter Gregson.  Unfortunately, the lead up is a little slow, dull.  It’s a very “niche” premise and it’s hard to get too excited watching someone construct a garden.  I was more interested in the inter-play between Sabine and André as their romantic feelings develop.

Kate Winslet (Titanic, The Reader) is the pick of the cast with her leading performance as Sabine.  It’s also nice to see her working alongside Alan Rickman again.  They featured in one of my all-time favourite period piece films, Sense & Sensibility, released 20 years ago.  Stanley Tucci also steals a few scenes with his light-hearted performance as a wealthy, stylish duke.

Those curious about this period of history may be intrigued but there’s not quite enough content in A Little Chaos to provide broader appeal.

You can read my chat with Alan Rickman by clicking here.