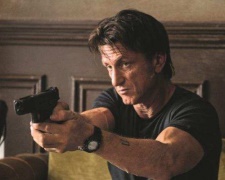 He’s a two time Academy Award winning actor but we haven’t seen much of Sean Penn on screen of late.  He starred in Gangster Squad (released in January 2013) and then had a small role in The Secret Life Of Walter Mitty (released in December 2013).  They’re his only on-screen credits in the past three years.  Penn hasn’t been lying on the couch at home though.  He’s been directing a film in South Africa (called The Last Face) with his current girlfriend, Charlize Theron.

In The Gunman, Penn plays Jim Terrier – a former soldier who is working for a private security company in Congo.  It may sound like a straight forward job but the reality is anything but.  Jim was ordered by his foreign employer to assassinate a high-profile minister within the Congo government.  This was in retaliation to a recent announcement that mining contracts with overseas entities would be reviewed due to suspected corruption.

Jim’s not the bad guy though.  Well, not any more.  These events took place 8 years ago and Jim has gone through a small transformation.  He never fessed up to the crime… but he’s now trying to make amends by performing humanitarian work in Congo.  He’s not going to be able to escape his past that easily though.  A group of unknown assailants are now trying to kill Jim to ensure he never reveals the truth.

Penn was attracted to the film for two reasons.  Firstly, it gave him the chance to take on a very different role for him – that of an action hero.  You can see he’s bulked up for the role and spent quite a few hours in the gym.  Secondly, it allowed him to promote a message that he believes in.  He wants audiences to think about Western companies that are exploiting natural resources in third world countries in pursuit of profit.

The Gunman was panned by most critics when released in the United States last month but it’s actually not too bad.  There are plenty of shootouts and punch-ups but the film’s most entertaining sequences revolve around Jim using his head as opposed to his fists.  A major highlight is a scene where he finds an explosive device in his apartment and then uses it to his own advantage.

The screenplay isn’t as strong as it could be.  There’s an odd subplot where he learn that Jim is periodically suffering from blurred vision and memory loss.  We even see him getting a cat scan and speaking with a doctor.  It’s clear the writers are trying to make the situation even more perilous but it feels unnecessary and detracts from the film’s credibility.

The film’s anti-capitalism messages get lost in the gunfire but this is still a satisfying action piece about one man trying to outsmart his many adversaries.