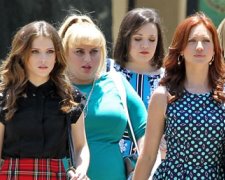 As a quick refresh, Pitch Perfect followed a college a cappella group, known as the Barden Bellas, who reinvigorated themselves to win the national championships.  As we learn in the opening sequence of Pitch Perfect 2, that success has been short lived.  Performing on stage in front of President Obama at the Kennedy Centre, the Bellas become international news when Fat Amy’s leotard splits open.  The incident is quickly dubbed “muffgate”.

The national body are worried about fallout from sponsors and so they take firm action.  The Bellas are officially suspended from all future a cappella performances on their around the country tour.  They will be replaced by Das Sound Machine – the cocky, arrogant champions from Germany who look like they belong as villains in a James Bond movie.

There’s a loophole however.  The competition handbook prescribes that as the reigning United States champions, the Bellas are entitled to perform at the world titles in Copenhagen.  If they become the first American team to win the coveted competition, the ban will be lifted and everyone will live happily ever after.

The first film, released back in 2012, was hugely entertaining.  Writer Kay Cannon introduced us to an eclectic cast who all provided plenty of laughs.  Unfortunately, Cannon has played it far too safe with this follow up.  It’s the same characters delivering the same types of jokes.  Lilly is the quiet one, Chloe is the dumb one, Fat Amy is the offensive one, and Becca is the creative one.  There’s just a single addition to the ensemble – the underutilised Emily played by Oscar nominee Hailee Steinfeld (True Grit).

With a limited, Step Up-like storyline and not much to add in the way of character development, the film uses music to fill the remainder of the two hour running time.  It offers an expansive soundtrack that includes modern day songs associated with Miley Cyrus, Destiny’s Child, Beyoncé and Jessie J.  Many of these are used in an odd subplot that sees the Bellas invited to a “sing off” against teams including the Green Bay Packers at the home of an a cappella devotee (played by comedian David Cross).

Director Jason Moore didn’t return for this sequel (he’s off making a better looking comedy with Amy Poehler and Tina Fey).  That’s given actor Elizabeth Banks (The Hunger Games) the chance to direct her first feature film.  She also gets to reprise her role as an a cappella commentary alongside her sexist male counterpart (played by John Michael Higgins).  He describes the contests as being “for girls too ugly to be cheerleaders”.

Heavy on music and light on story, Pitch Perfect 2 lacks the creativity that made the original so much fun.

You can read my chat with vocal director Deke Sharon by clicking here.