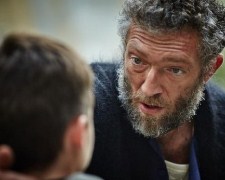 “Puzzling” is the best word to describe the opening half-hour of Partisan, the feature debut of Australian director Ariel Kleiman.  Where is it set?  My best guess was a small, rundown town in Eastern Europe but there aren’t any clues to help.  When is it set?  There’s nothing in the way of modern technology (phones, televisions).  Is it in the current day?  50 years ago?  Maybe it’s somewhere in the future?

Don’t expect any answers.  Kleiman describes the film as a “mythic tale” set in a place labelled “nowhere land”.  It’s like a classic fable where the location isn’t really important – it’s more about characters and the message.  Once you come to that realisation, you can sit back and soak in this intriguing premise.

It is told through the eyes of Alexander (Chabriel), an 11-year-old boy who lives in a sheltered commune.  It is home to a bunch of poor, single mothers and their young children.  There’s just one man amongst them, Gregori (Cassel).  For the women, he’s the quasi-husband who provides comfort, shelter and food.  For the kids, he’s a father-like figure who serves as both mentor and educator.

They all seem to be living a happy life.  There’s not much in the way of conflict.  Why are they living that way though?  No one is allowed to leave the commune unless instructed by Gregori.  Some characters don’t appear to have been outside the walls in many years.  Is Gregori keeping them safe from a nastiness that exists on the outside?  Or is he a controlling, dominating individual who is taking advantage of those most vulnerable?

Despite his enclosed surroundings, Alexander is a sharp, mature kid who is starting to ask his own questions about the small world he inhabits.  He’s always looked up to Gregori and heeded his advice but now he has doubts.  A few shorts trips to the “outside” world only add to his confusion.  There’s a poignant moment where he meets an old man in a supermarket and is given a chocolate bar to try for the first time.

Partisan is a film that gets you thinking about the way that parents can influence and shape children.  Contemplate your own situation.  Do you share the same religious beliefs as your parents?  What about your political views, your manners, and your ethics?  At what age do you start to think for yourself?  What if you lived a sheltered life like Alexander and had no friends or teachers to provide differing views?

The Sundance Film Festival is about as big as it gets in terms of independent cinema but less than 5% of feature films submitted each year make it into the final program.  One of those in 2015 was Partisan and the reason is obvious – Kleiman’s skill mixed with a splash of luck.  Fellow Australian Germain McMicking picked up an award for the film’s striking cinematography.

French actor Vincent Cassel (Black Swan) is terrific as Gregori.  His motives are difficult to ascertain and your position on his character will waver throughout the film.  Young actor Jeremy Chabriel, who had no acting experience prior to the film, also makes his mark as the likeable Alexander.

The story drags a little in the middle stages but this is still a strong, unsettling Australian feature and I’m pleased to see it making its way into local cinemas.