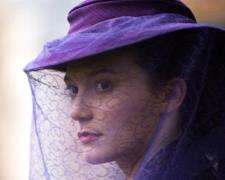 In the space of a month, we’ve had the chance to see two films that have been set in the mid-to-late 19th Century and that centre on a young woman pursued by multiple suitors.  The first was Far From The Madding Crowd, based on the novel by Thomas Hardy and starring Carey Mulligan.  The second is Madame Bovary, based on the novel by French writer Gustave Flaubert and starring Australia’s own Mia Wasikowska (Alice In Wonderland, Tracks).

Emma (Wasikowska) is a well-educated woman who has married Charles (Lloyd-Hughes), a successful doctor (well, her father helped set them up).  They have a nice home with beautiful views in a small French town.  It comes complete with a hard-working maid and a finely tuned piano.

It may sound like an idyllic life but Emma is bored stupid.  She laments that “every day is the same.”  Charles works hard and when he finally gets home, he’s usually tired with little to say.  Emma is also frustrated by her husband’s lack of ambition.  She wants him to start a business in a bigger town like Rouen as it would give her so much more to do and to see.  It’s not Charles’ desire however.  He’s content with his quiet country life.

As the famous saying goes – “idle hands are the devil’s playthings.”  Emma finds herself interested in two men who appear to be much more sophisticated than her husband.  The first is Leon (Miller), a young law student with a fondness for literature, theatre and music.  The second is a wealthy, handsome nobleman (Marshall-Green) who loves to mingle with the upper echelon of society.  Both men leave her confused and vulnerable.  Should she leave her reliable Charles and take a chance on someone new?

Adding Emma’s woes is her penchant for shopping.  She has been seduced by a local merchant (Ifans) into buying beautiful clothes and homewares using the newfound concept of “credit”.  The debts are piling up and it’s become yet another secret that Emma must keep from her husband.  She’s finally found a way of filling her free time – with stress and worry.

The story may be 160 years old but the messages contained in Madame Bovary feels just as relevant today.  Just like Emma, too often we think “the grass is greener on the other side.”  We lament about our imperfect lives and we forget about all the good stuff.  It also explores the flawed concept that money makes you happy.  Emma’s attempts to appear rich and successful only further add to her demise.

French-born writer-director Sophie Barthes has done a wonderful job fleshing out the novel’s themes inside of two hours.  Mia Wasikowska deserves praise for her leading performance which skilfully shows her character’s strengths and weaknesses. It’s also great to see the sharp Ezra Miller on screen for the first time since 2012’s The Perks Of Being A Wallflower.

The film’s hasn’t been particularly well received by critics since its premiere at Telluride last August but as someone new to the story of Madame Bovary (I haven’t read the novel or seen any of the earlier films), I was lured by its setting, its colours, and its ideas.