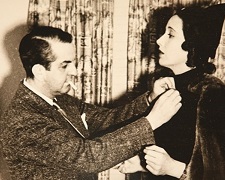 Pop quiz.  Which Australian has won more Academy Awards than any other?  Costume and production designer Catherine Martin (Moulin Rouge, The Great Gatsby) set a new benchmark in 2013 with her 4th win.  Up until then, the record had been held for more than 50 years by costume designer Orry-Kelly who won for An American In Paris, Les Girls and Some Like It Hot.  He could have won a lot more if not for the fact the Academy didn’t introduce the best costume design category until 1949.

If you’d have mentioned the name Orry-Kelly to me a few weeks ago, my first response would have been “who?”  Many others would have a similar response.  That answer is a big reason why acclaimed director Gillian Armstrong (My Brilliant Career, Little Women, Oscar & Lucinda) wanted to bring Orry-Kelly story to the screen.  How did an unknown from a small town in New South Wales end up designing costumes for Bette Davis, Olivia de Havilland, Ingrid Bergman and Katharine Hepburn in Hollywood?

The title may lure you into thinking this is simply a two-hour film about great costumes.  It offers much more than that.  Orry-Kelly’s career began in New York during the Roaring Twenties.  An openly gay man, Orry-Kelly embraced the era’s cultural progression.  He found work in the clothing industry and ended up designing extravagant sets and costumes for Broadway shows.  He spent several years living with Cary Grant and many believed they were in a relationship.

Orry-Kelly moved to Hollywood in the early 1930s and his career took a rollercoaster-like path.  The highs were high.  He was employed by Warner Bros. in 1932 and he designed the costumes for hundreds of films including Casablanca, The Maltese Falcon, and 42nd Street.  The lows were low.  He battled alcoholism and found himself subject to discrimination because of his sexuality.  Hollywood was a lot more repressed than New York.

Considering that Orry-Kelly died in 1964, trying to put together a well-informed documentary was a challenge for Armstrong.  Many of the people he worked had also passed away.  Thankfully, she was able to speak with the likes of Oscar winning costume designer Ann Roth (who worked with him on Oklahoma!) and actors Jane Fonda and Angela Lansbury (who worked with him in the early 1960s).  There are plenty of other costumers and film buffs who share their own thoughts on Orry-Kelly’s legacy.

Armstrong didn’t feel it best to use a traditional narrator to tell the story.  Instead, she’s used an actor (Darren Gilshenan) who appears on screen from time-to-time.  Armstrong believed this would provide better insight into Orry-Kelly’s mindset.  It’s a little clunky but it’s hard to suggest a better alternative.  There isn’t much in the way of photos or videos of the real Orry-Kelly.  It was nice though to see Armstrong include one of his Academy Award acceptance speeches as one of the final scenes.

A major part of the film’s allure is that you feel like you’re accompanying Armstrong on this journey of discovery.  She’s deliberate in the way that information is revealed.  Just when you think you have an understanding of Orry-Kelly, she throws in a surprising twist that sends the narrative on a different path.  Make sure you stay through the closing credits because it includes perhaps the biggest discovery of all.