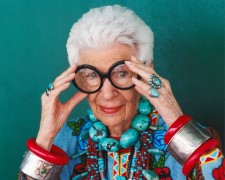 Over the past year, fashion documentaries have been finding an audience in Australian cinemas.  Advanced Style followed a group of elderly women in New York trying to leave their mark on the fashion world.  Dior & I took us inside the House of Christian Dior as newly appointed designer Raf Simons pulled together his first collection.  Women He’s Undressed chronicled the life of Australian costume designer Orry-Kelly who made it big in Hollywood in the 1930s.

The latest addition to that group is Iris – a short, simple documentary that tells the story of 93-year-old fashion icon Iris Apfel.  She grew up with her parents during the Great Depression, she ran an interior design company that helped renovate the White House, and she’s had her favourite outfits exhibited at renowned museums across the United States.  Oh, and she’s been happily married for more than 65 years.  Not a bad life if you ask me!

Iris’s personality is as bold as her attire.  Full of memorable quotes, she opens the film by expressing her dislike for today’s homogenised fashion.  Everyone is walking around wearing the same stuff.  It leads into another insightful moment where she says that it’s often more fun getting ready for the party than actually going to the party itself.

It’s hard to describe Iris Apfel’s sense of style in words.  You’re best to Google her name and flip through the many images available.  She doesn’t design the clothes herself.  Rather, she scours the streets of New York City to find an assortment of affordable outfits that she can pull together into something magical.  She’s big on colour.  She’s big on accessories.  Iris’s collection is so large that it’s spread across multiple closets… in multiple rooms… in multiple apartments!

There’s a tinge of sadness that encompasses the film as it marks one of the last features of director Albert Maysles (Grey Gardens) who passed away in March this year at the age of 88.  His career spanned 60 years and included an Academy Award nomination in 1974 for his short subject documentary, Christo’s Valley Curtain.  We get a glimpse of Maysles in the later stages and you can see the enjoyment he drew from the project.  It’s hard not to smile while listening to Iris and watching her sift through racks in obscure clothes stores in search of a bargain.

Clocking in at just 80 minutes, Iris drums home its agreeable themes – never be afraid to express yourself and never stop having fun.  It’s nice to be reminded of this by someone with 93 years of experience.  The film could also be described as a love story as we get a glimpse of the beautiful relationship that Iris and her husband (Carl) have shared for so long.  They’re both got great memories given their age.

Iris’s misadventures get a little repetitive in the later stages but this is still a sweet, feel-good documentary about an opinionated individual.